I thought these two items in the Random Samples section of the Feb. 6 Science Magazine were a hoot:

Elaine Murphy was just starting her medical career in 1974 when she and her husband, John, pulled a fast one on the editors of the British Medical Journal (BMJ). The joke's long run ended last week when the Murphys confessed that a medical condition, "cello scrotum," they coined in a letter to the journal 35 years ago doesn't exist.

Now a baroness and member of the British House of Lords, Murphy and her partner in crime admitted the hoax in a letter published 27 January in BMJ. The couple came up with the prank after reading a letter to BMJ in April 1974 on "guitar nipple," an alleged chest inflammation that the couple assumed was fake. In the spirit of one-upmanship, the pair wrote a short note on "cello scrotum," an inflammation on a fabricated patient who played the cello for hours each day. "We never expected our spoof letter to be published," Murphy says. "We probably wrote it after a glass of wine or two."

The Murphys came clean after finding a reference to cello scrotum in a December 2008 issue of the journal. Although journal editors disapprove of dishonesty in science, Tony Delamothe, a deputy editor at BMJ, says that the Murphys' joke was harmless. "All of my colleagues, from the editor down, think it's a hoot," Delamothe says. Murphy adds that she's received no negative fallout. "I was worried the House of Lords would think I was bringing them into disrepute," she says, "but so far, everyone wants to enjoy the joke." 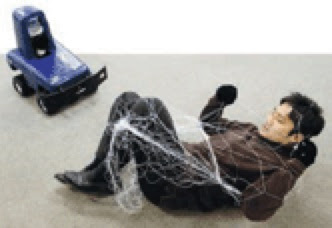 It's not RoboCop, but Japanese robotmaker Tmsuk believes its T-34 security robot can fight crime by snaring intruders in an entangling net. The 60-centimeter-tall robot sends real-time video of its surroundings to a remote operator's mobile phone over Japan's advanced mobile phone service, eliminating the need for cables or wireless networks. On command, the T-34 fires a weighted net capable of enveloping a human target up to 3.5 meters away, holding the suspected criminal until security officers arrive. Tmsuk, which worked with security service provider Alacom in developing the T-34, says the robot could confront dangerous intruders while keeping human guards at a safe distance. "We think this could serve the needs of the security industry," says company spokesperson Mariko Ishikawa. The company recently demonstrated a working prototype and says a commercial model could be on the market in a few years for about $5000.

Posted by Deric Bownds at 5:50 AM
Email ThisBlogThis!Share to TwitterShare to FacebookShare to Pinterest
Blog Categories: culture/politics