Flash judgement based on appearance.

I want to point to two articles on how we make rapid judgements based on first impressions.

Torodov's essay in aeon is a fascinating review of the history of studies on flash judgement of faces.  Here is  one clip:

Competence is perceived as the most important characteristic of a good politician. But what people perceive as an important characteristic can change in different situations. Imagine that it is wartime, and you must cast your presidential vote today. Would you vote for face A or face B in Figure 1 below? Most people quickly go with A. What if it is peacetime? Most people now go with B. 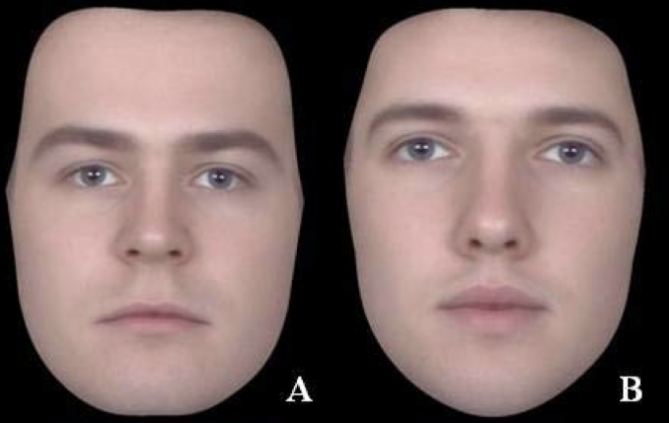 These images were created by the psychologist Anthony Little at the University of Bath and his colleagues in the UK. Face A is perceived as more dominant, more masculine, and a stronger leader – attributes that matter in wartime. Face B is perceived as more intelligent, forgiving, and likeable – attributes that matter more in peacetime. Now look at the images in Figure 2 below. 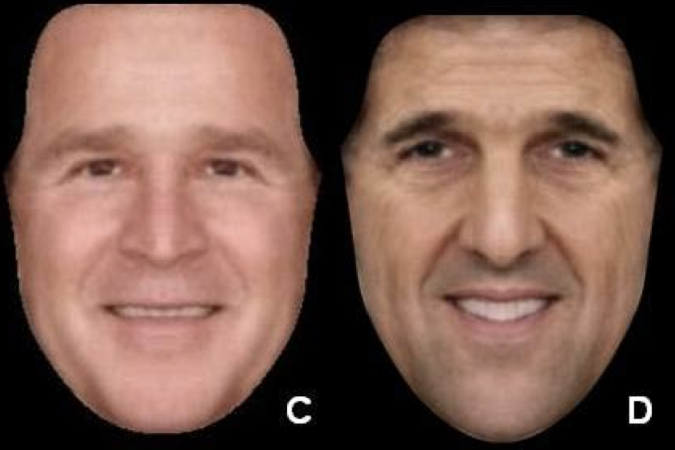 You should be able to recognise the former president George W Bush and the former secretary of state John Kerry. Back when the study was done, Kerry was the Democratic candidate running against Bush for the US presidency. Can you see some similarities between images A (Figure 1) and C (Figure 2), and between images B (Figure 1) and D (Figure 2)? The teaser is that the images in Figure 1 show what makes the faces of Bush and Kerry distinctive. To obtain the distinctiveness of a face, you need only find out what makes it different from an average face – in this case, a morph of about 30 male faces. The faces in Figure 1 were created by accentuating the differences between the shapes of Bush’s and Kerry’s faces and the average face shape. At the time of the election in 2004, the US was at war with Iraq. I will leave the rest to your imagination.

What we consider an important characteristic also depends on our ideological inclinations. Take a look at Figure 3 below. Who would make a better leader? 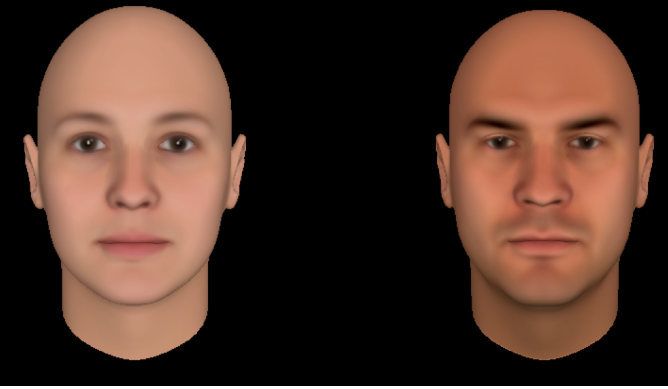 
People infer the personalities of others from their facial appearance. Whether they do so from body shapes is less studied. We explored personality inferences made from body shapes. Participants rated personality traits for male and female bodies generated with a three-dimensional body model. Multivariate spaces created from these ratings indicated that people evaluate bodies on valence and agency in ways that directly contrast positive and negative traits from the Big Five domains. Body-trait stereotypes based on the trait ratings revealed a myriad of diverse body shapes that typify individual traits. Personality-trait profiles were predicted reliably from a subset of the body-shape features used to specify the three-dimensional bodies. Body features related to extraversion and conscientiousness were predicted with the highest consensus, followed by openness traits. This study provides the first comprehensive look at the range, diversity, and reliability of personality inferences that people make from body shapes. 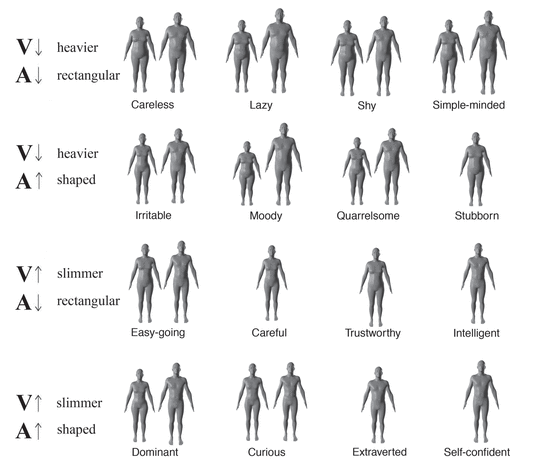 Figure - (click to enlarge). A subset of body stereotypes we created from single or multiple bodies that received extreme ratings on individual traits (for the entire set. The figure is organized to show sample traits with positive and negative combinations of valence (V) and agency (A). For example, Row 1 shows bodies that have negative valence (heavier) and negative agency (less shaped, more rectangular).