In this new age of artificial stupidity, technological disruption has turned destructive. Its greatest victim is reality itself...It is a far cry from an earlier period of digital expansion, when internet communication was seen to promote global exchange and understanding...The online world seemed like a Disney vision of multiculturalism, promoting sterile tolerance from above. Now technology divides and fragments; it identifies and ranks people.

The norms of reality TV have found a foothold in the digital age. The point is not that there is no reality — the point is that it’s every fact for itself, competing against all others, while social media multiply alternative versions of it...This is our real, existing digital world: nothing more than hourly waves of feverish and toxic agitation, played out over stale mainstream channels that discourage innovation and experimentation, drown in excruciating advertisements and drain people’s attention and souls...An unpopular truth cannot survive online in such a world, because traction is privileged over veracity. And to artificially stupid automatons and algorithms, reality is defined as brute quantity, by ranking, ratings and elimination.

And author Erin Griffith does two pieces. "Why Are Young People Pretending to Love Work?" very much describes the culture of techie 20-35 year old workers in Austin, Texas - where I now live - where performative workaholism and 18 hour work days have become a lifestyle.


“Owning one’s moment” is a clever way to rebrand “surviving the rat race.” In the new work culture, enduring or even merely liking one’s job is not enough. Workers should love what they do, and then promote that love on social media, thus fusing their identities to that of their employers...This is toil glamour, and it is going mainstream. Most visibly, WeWork — which investors recently valued at $47 billion — is on its way to becoming the Starbucks of office culture. It has exported its brand of performative workaholism to 27 countries...Rather than just renting desks, the company aims to encompass all aspects of people’s lives, in both physical and digital worlds...The ideal client, one imagines, is someone so enamored of the WeWork office aesthetic...that she sleeps in a WeLive apartment, works out at a Rise by We gym, and sends her children to a WeGrow school.

In the same vein see Roger Cohen's piece on the harm in hustle culture.


As headlines have exposed the troubling inner workings of company after company, startup culture no longer feels like fodder for gentle parodies about ping pong and hoodies. It feels ugly and rotten. Facebook, the greatest startup success story of this era, isn’t a merry band of hackers building cutesy tools that allow you to digitally Poke your friends. It’s a powerful and potentially sinister collector of personal data, a propaganda partner to government censors, and an enabler of discriminatory advertising.

In 2008, it was Wall Street bankers. In 2017, tech workers are the world’s villain. “It’s the exact same story of too many people with too much money. That breeds arrogance, bad behavior, and jealousy, and society just loves to take it down,” the investor said. As a result, investors are avoiding anything that feels risky. Hunter Walk, a partner with venture capital firm Homebrew, which invested in Bodega, attributes the backlash to a broader response to power. Tech is now a powerful institution, he says. “We no longer get the benefit of the doubt 100 percent of the time, and that’s okay.”

Evidence is mounting that that the world is no longer fascinated with Silicon Valley: It’s disturbed by its callous behavior. But it will take a massive shift to introduce self-awareness to an industry that has always assumed it was changing the world for the better. Cynics would argue it doesn’t matter. The big tech companies are too big to fail, too complicated to be parsed or regulated, and too integral to business, the economy, and day-to-day life. We’re not going to abandon our cell phones or social networks. This is how we live now.

And finally, a cartoon from the NYTimes on our evolution: 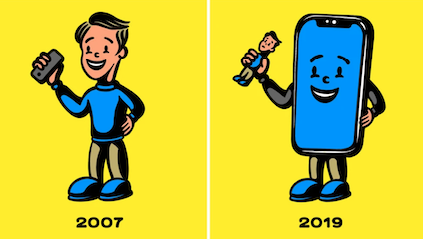 Posted by Deric Bownds at 12:00 AM
Email ThisBlogThis!Share to TwitterShare to FacebookShare to Pinterest
Blog Categories: culture/politics, future, futures, technology