Impacts of outdoor artificial light on plant and animal species.

Gaston does a perspective article describing how the nighttime lighting up of our planet is profoundly disturbing the activities of many animal and plant species. I pass on three paragraphs:


Artificial light at night can usefully be thought of as having two linked components. The first component—direct emissions from outdoor lighting sources, which include streetlights, building and infrastructure lighting, and road vehicle headlamps—is spatially extremely heterogeneous. Ground-level illuminance in the immediate vicinity can vary from less than 10 lux (lx) to more than 100 lx (for context, a full moon on a clear night has an illuminance of up to 0.1 lx). It often declines rapidly over distances of a few meters. However, emissions from unshielded lights can, when unobstructed, carry horizontally over many kilometers, making artificial light at night both an urban and a rural issue.

The second component of artificial light at night is skyglow, the brightening of the nighttime sky caused mainly by upwardly emitted and reflected artificial light that is scattered in the atmosphere by water, dust, and gas molecules. Although absolute illuminance levels are at most about 0.2 to 0.5 lx, much lower than those from direct emissions, these are often sufficiently high to obscure the Milky Way, which is used for orientation by some organisms. In many urban areas, skyglow even obscures lunar light cycles, which are used by many organisms as cues for biological activity. 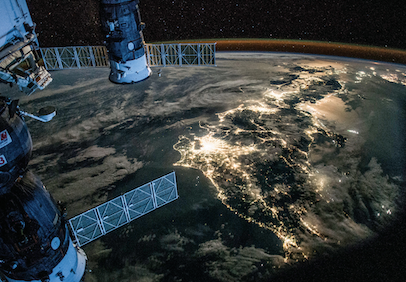 In the laboratory, organismal responses, such as suppression of melatonin levels and changes to behavioral activity patterns, generally increase with greater intensities of artificial light at night. It is challenging to establish the form of such functional relationships in the field, but experiments and observations have shown that commonplace levels of artificial light at night influence a wide range of biological phenomena across a wide diversity of taxa, including individual physiology and behavior, species abundances and distributions, community structure and dynamics, and ecosystem function and process. Exposure to even dim nighttime lighting (below 1 lx) can drastically change activity patterns of both naturally day-active and night-active species. These effects can be exacerbated by trophic interactions, such that the abundances of species whose activity is not directly altered may nonetheless be severely affected under low levels of nighttime lighting.

Posted by Deric Bownds at 3:00 AM
Email ThisBlogThis!Share to TwitterShare to FacebookShare to Pinterest
Blog Categories: animal behavior