I live in Fort Lauderdale, an epicenter of life extension companies peddling life extending elixirs. I've tried a few of them, and reported on my experiences in this MindBlog. It is good to see the occasional breath of sanity offered by articles like this one from Dong et al. (I'm passing along their abstract and two figures):


Driven by technological progress, human life expectancy has increased greatly since the nineteenth century. Demographic evidence has revealed an ongoing reduction in old-age mortality and a rise of the maximum age at death, which may gradually extend human longevity. Together with observations that lifespan in various animal species is flexible and can be increased by genetic or pharmaceutical intervention, these results have led to suggestions that longevity may not be subject to strict, species-specific genetic constraints. Here, by analysing global demographic data, we show that improvements in survival with age tend to decline after age 100, and that the age at death of the world’s oldest person has not increased since the 1990s. Our results strongly suggest that the maximum lifespan of humans is fixed and subject to natural constraints. 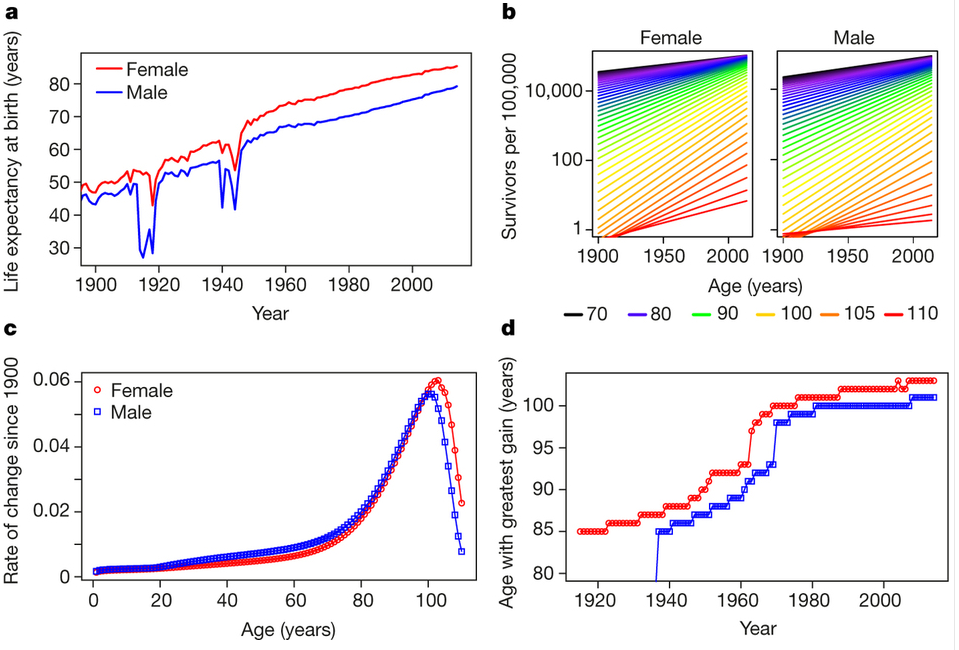 a, Life expectancy at birth for the population in each given year. Life expectancy in France has increased over the course of the 20th and early 21st centuries. b, Regressions of the fraction of people surviving to old age demonstrate that survival has increased since 1900, but the rate of increase appears to be slower for ages over 100. c, Plotting the rate of change (coefficients resulting from regression of log-transformed data) reveals that gains in survival peak around 100 years of age and then rapidly decline. d, Relationship between calendar year and the age that experiences the most rapid gains in survival over the past 100 years. The age with most rapid gains has increased over the century, but its rise has been slowing and it appears to have reached a plateau.

All data were collected from the IDL database (France, Japan, UK and US, 1968–2006). a, The yearly maximum reported age at death (MRAD). The lines represent the functions of linear regressions. b, The annual 1st to 5th highest reported ages at death (RAD). The dashed lines are estimates of the RAD using cubic smoothing splines. The red dots represent the MRAD. c, Annual average age at death of supercentenarians (110 years plus, n = 534). The solid line is the estimate of the annual average age at death of supercentenarians, using a cubic smoothing spline.

Posted by Deric Bownds at 3:00 AM
Email ThisBlogThis!Share to TwitterShare to FacebookShare to Pinterest
Blog Categories: aging, culture/politics