Science in the age of selfies

Some clips from an interesting opinion piece by Geman and Geman in the Proceedings of the National Academy: 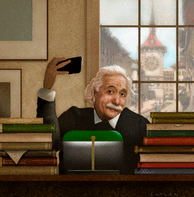 These days, scientists spend much of their time taking “professional selfies”—effectively spending more time announcing ideas than formulating them.


The authors begin by contrasting the period from 1915 to 1965 with the subsequent 50 years. In the earlier period,


Life scientists discovered DNA, the genetic code, transcription, and examples of its regulation, yielding, among other insights, the central dogma of biology. Astronomers and astrophysicists found other galaxies and the signatures of the big bang. Groundbreaking inventions included the transistor, photolithography, and the printed circuit, as well as microwave and satellite communications and the practices of building computers, writing software, and storing data. Atomic scientists developed NMR and nuclear power. The theory of information appeared, as well as the formulation of finite state machines, universal computers, and a theory of formal grammars. Physicists extended the classical models with the theories of relativity, quantum mechanics, and quantum fields, while launching the standard model of elementary particles and conceiving the earliest versions of string theory.


Maybe not. Perhaps, though, the pace of technological development would have surprised most futurists, but the trajectory was at least partly foreseeable. This is not to deny that our time traveler would find the Internet, new medical imaging devices, advances in molecular biology and gene editing, the verification of gravity waves, and other inventions and discoveries remarkable, nor to deny that these developments often required leaps of imagination, deep mathematical analyses, and hard-earned technical know-how. Nevertheless, the advances are mostly incremental, and largely focused on newer and faster ways to gather and store information, communicate, or be entertained.

Here there is a paradox: Today, there are many more scientists, and much more money is spent on research, yet the pace of fundamental innovation, the kinds of theories and engineering practices that will feed the pipeline of future progress, appears, to some observers, including us, to be slowing


What has certainly changed, even drastically, is the day-to-day behavior of scientists, partly driven by new technology that affects everyone and partly driven by an alteration in the system of rewards and incentives...One outcome that might be quickly apparent to our time traveler would be the new mode of activity, “being online,” and how popular it is...most of us, but especially young people, are perpetually distracted by “messaging.” ..Constant external stimulation may inhibit deep thinking. In fact, is it even possible to think creatively while online? Perhaps “thinking out of the box” has become rare because the Internet is itself a box... Easy travel, many more meetings, relentless emails, and, in general, a low threshold for interaction have created a veritable epidemic of communication. Evolution relies on genetic drift and the creation of a diverse gene pool. Are ideas so different? Is there a risk of cognitive inbreeding? Communication is necessary, but, if there is too much communication, it starts to look like everyone is working in pretty much the same direction. A current example is the mass migration to “deep learning” in machine intelligence.

In fact, maybe it has become too easy to collaborate. Great ideas rarely come from teams...Science of the past 50 years seems to be more defined by big projects than by big ideas...It may not be a coincidence...that two of the most profound developments in mathematics in the current century—Grigori Perelman’s proof of the Poincaré conjecture and Yitang Zhang’s contributions to the twin-prime conjecture—were the work of iconoclasts with an instinct for solitude and, by all accounts, no particular interest in being “connected.” Prolonged focusing is getting harder. In the past, getting distracted required more effort. Writer Philip Roth predicts a negligible audience for novels (“maybe more people than now read Latin poetry, but somewhere in that range”) as they become too demanding of sustained attention in our new culture.


...maybe the biggest change affecting scientists is their role as employees, and what they are paid for doing—in effect, the job description. In industry, there are few jobs for pure research and, despite initiatives at companies like Microsoft and Google, still no modern version of Bell Labs. At the top research universities, scientists are hired, paid, and promoted primarily based on their degree of exposure, often measured by the sheer size of the vita listing all publications, conferences attended or organized, talks given, proposals submitted or funded, and so forth...The response of the scientific community to the changing performance metrics has been entirely rational: We spend much of our time taking “professional selfies.” In fact, many of us spend more time announcing ideas than formulating them. Being busy needs to be visible, and deep thinking is not. Academia has largely become a small-idea factory. Rewarded for publishing more frequently, we search for “minimum publishable units.”...incentives for exploring truly novel ideas have practically disappeared.


Albert Einstein remarked that “an academic career, in which a person is forced to produce scientific writings in great amounts, creates a danger of intellectual superficiality”; the physicist Peter Higgs felt that he could not replicate his discovery of 1964 in today’s academic climate; and the neurophysiologist David Hubel observed that the climate that nurtured his remarkable 25-year collaboration with Torsten Wiesel, which began in the late 1950s and revealed the basic properties of the visual cortex, had all but disappeared by the early 1980s, replaced by intense competition for grants and pressure to publish. Looking back on the collaboration, he noted that “it was possible to take more long-shots without becoming panic stricken if things didn’t work out brilliantly in the first few months”

The authors end their article by suggesting one way of attempting to reverse the small idea factory:


Change the criteria for measuring performance. In essence, go back in time. Discard numerical performance metrics, which many believe have negative impacts on scientific inquiry. Suppose, instead, every hiring and promotion decision were mainly based on reviewing a small number of publications chosen by the candidate. The rational reaction would be to spend more time on each project, be less inclined to join large teams in small roles, and spend less time taking professional selfies. Perhaps we can then return to a culture of great ideas and great discoveries.

Posted by Deric Bownds at 3:00 AM
Email ThisBlogThis!Share to TwitterShare to FacebookShare to Pinterest
Blog Categories: culture/politics, future, futures, technology