The respective roles of attentional and default mode networks in our brains has been the subject of numerous MindBlog posts (enter 'default mode' in the search box in the left column). A summary article by Bola and Borchardt notes an important recent contribution by Vatansever et al., whose abstract is shown below, followed by a graphic from the summary article.  Their work changes the previous view that the default mode disengages during goal-directed tasks.


The default mode network (DMN) has been traditionally assumed to hinder behavioral performance in externally focused, goal-directed paradigms and to provide no active contribution to human cognition. However, recent evidence suggests greater DMN activity in an array of tasks, especially those that involve self-referential and memory-based processing. Although data that robustly demonstrate a comprehensive functional role for DMN remains relatively scarce, the global workspace framework, which implicates the DMN in global information integration for conscious processing, can potentially provide an explanation for the broad range of higher-order paradigms that report DMN involvement. We used graph theoretical measures to assess the contribution of the DMN to global functional connectivity dynamics in 22 healthy volunteers during an fMRI-based n-back working-memory paradigm with parametric increases in difficulty. Our predominant finding is that brain modularity decreases with greater task demands, thus adapting a more global workspace configuration, in direct relation to increases in reaction times to correct responses. Flexible default mode regions dynamically switch community memberships and display significant changes in their nodal participation coefficient and strength, which may reflect the observed whole-brain changes in functional connectivity architecture. These findings have important implications for our understanding of healthy brain function, as they suggest a central role for the DMN in higher cognitive processing.


The default mode network (DMN) has been shown to increase its activity during the absence of external stimulation, and hence was historically assumed to disengage during goal-directed tasks. Recent evidence, however, implicates the DMN in self-referential and memory-based processing. We provide robust evidence for this network's active contribution to working memory by revealing dynamic reconfiguration in its interactions with other networks and offer an explanation within the global workspace theoretical framework. These promising findings may help redefine our understanding of the exact DMN role in human cognition. 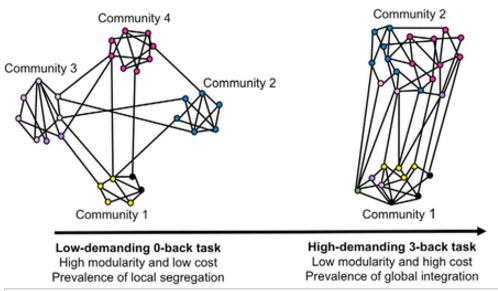 Schematic representation of the main findings of Vatansever et al. Community representation and colors are in the style of Figures 1 and 3 in the article by Vatansever et al. (2015), and the DMN is represented by Community 4. In the low-demanding 0-back condition, the network was highly modular (high Q index) and was divided into four distinct modules. With the increasing cognitive load, the modularity of the network decreased, and three communities merged into one. Thus, while local segregation was prevalent in the low-demanding task, increasing cognitive effort was associated with more pronounced global integration.

Posted by Deric Bownds at 3:00 AM
Email ThisBlogThis!Share to TwitterShare to FacebookShare to Pinterest
Blog Categories: attention/perception, brain plasticity