Psilocybin as a key to consciousness.

Michael Pollan offers an engaging article "The Trip Treatment" in the Feb. 9 issue of The New Yorker magazine that describes the resurgence of interest and research on psychotropics like psilocybin, particularly their use in ameliorating end of life anxiety and stress. He points to interesting work by Carhart-Harris and collaborators that I wish I had been paying more attention to. Their article on the effects of psilocybin and MDMA on the resting state functional connectivity (RSFC) between different resting state networks (RSNs) describes experiments showing that psilocybin increases RSFC, making brain networks less differentiated from each other in the psychedelic state, decreasing the natural distinction between externally-focused attention (task positive networks) and introspection (default mode network). The idea is that this de-differentiation of brain networks, this transient disorganizing of brain activity, underlies mystical experiences such as feelings of unity, ineffability, sacredness, peace and joy, transcending space and time, sacredness, or finding some objective truth about reality.

What I would particularly point MindBlog readers to in this open source article is the excellent graphics depictions of Resting State Networks and their functional associations (visual, auditory, sensorimotor, default mode, executive control, dorsal attentional, etc.), and the illustration of marked increases in between-network RSFC under psilocybin.

I should point also to their more general theory of conscious states informed by neuroimaging research with psychedelics, which they term "The entropic brain hypothesis." Here is their summary graphic: 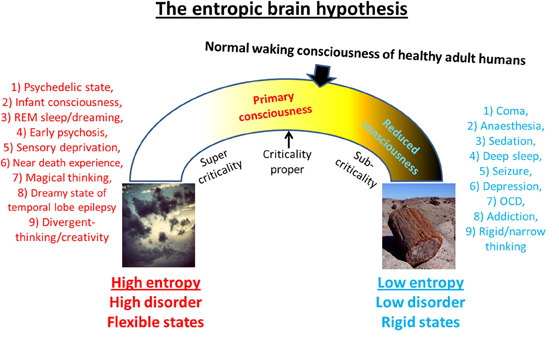 Spectrum of cognitive states. This schematic shows an “inverted u” relationship between entropy and cognition such that too high a value implies high flexibility but high disorder, whereas too low a value implies ordered but inflexible cognition. It is proposed that normal waking consciousness inhabits a position that is close to criticality but slightly sub-critical and primary states move brain activity and associated cognition toward a state of increased system entropy i.e., brain activity becomes more random and cognition becomes more flexible. It is proposed that primary states may actually be closer to criticality proper than secondary consciousness/normal waking consciousness.
Posted by Deric Bownds at 3:00 AM
Email ThisBlogThis!Share to TwitterShare to FacebookShare to Pinterest
Blog Categories: attention/perception, consciousness