Metacognition is the ability to observe, reflect on, and report one's own mental states during wakefulness. Dreaming is not typically accessible to this kind of monitoring, except in people who are lucid dreamers, aware that they are dreaming while in the sleep state (I can do this). Filevich et al. have looked for relationships between the neural correlates of lucid dreaming and thought monitoring:


Lucid dreaming is a state of awareness that one is dreaming, without leaving the sleep state. Dream reports show that self-reflection and volitional control are more pronounced in lucid compared with nonlucid dreams. Mostly on these grounds, lucid dreaming has been associated with metacognition. However, the link to lucid dreaming at the neural level has not yet been explored. We sought for relationships between the neural correlates of lucid dreaming and thought monitoring.

Human participants completed a questionnaire assessing lucid dreaming ability, and underwent structural and functional MRI. We split participants based on their reported dream lucidity. Participants in the high-lucidity group showed greater gray matter volume in the frontopolar cortex (BA9/10) compared with those in the low-lucidity group. Further, differences in brain structure were mirrored by differences in brain function. The BA9/10 regions identified through structural analyses showed increases in blood oxygen level-dependent signal during thought monitoring in both groups, and more strongly in the high-lucidity group. 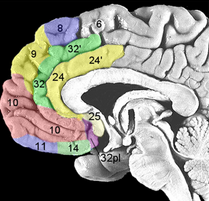 Our results reveal shared neural systems between lucid dreaming and metacognitive function, in particular in the domain of thought monitoring. This finding contributes to our understanding of the mechanisms enabling higher-order consciousness in dreams.

Posted by Deric Bownds at 3:00 AM
Email ThisBlogThis!Share to TwitterShare to FacebookShare to Pinterest
Blog Categories: consciousness, sleep