This post points to another of the articles in the Science special issue on aging. Lindenberger summarizes key features of human cognitive aging from the combined perspectives of life-span psychology and the cognitive neuroscience of aging, and notes a number of longitudinal studies that suggest that leading an intellectually challenging, physically active, and socially engaged life may mitigate losses and consolidate gains during cognitive aging. Here is a summary figure from the article: 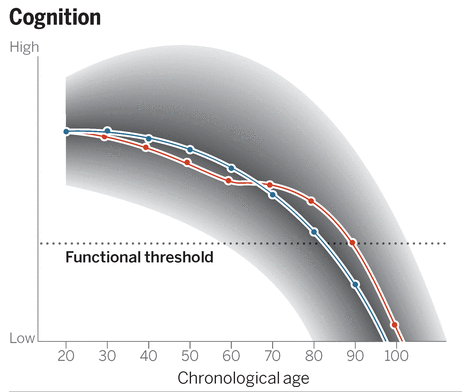 The blue curve shows the most likely developmental path under normal circumstances. The fading of the background color indicates that more extreme paths are less likely. The functional threshold represents a level of functioning below which goal-directed action in the individual’s ecology will be severely compromised. The red curve represents the hope that changes in organism-environment interactions during adulthood move the individual onto a more positive trajectory. Beneficial changes may consist in the mitigation of risk factors, such as vascular conditions, metabolic syndrome, or chronic stress; the strengthening of enhancing factors, such as neuroplasticity; or both.

Posted by Deric Bownds at 3:00 AM
Email ThisBlogThis!Share to TwitterShare to FacebookShare to Pinterest
Blog Categories: aging