The subliminal power of logos 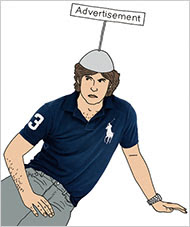 An interesting article by Rob Walker in the New York Times Magazine: "The Brand-ness of Strangers."

In one study, each subject was shown 20 photographs of people in various situations and instructed to focus on facial expressions. Afterward, each subject was offered a bottle of water from a selection of four brands. The experiment had nothing to do with facial expressions and everything to do with which kind of water they chose: the subjects had been divided into groups, based on how many of the photos they viewed incidentally included a bottle of Dasani water. Among those who looked at Dasani-free pictures, about 17 percent chose that brand. But about 40 percent of those who viewed a group of pictures that included 12 with a Dasani presence made the brand their pick. Since subjects who actually noticed the brand in the pictures were eliminated from the results, that spike in popularity evidently came from exposure that the subjects weren’t even aware of.

Needless to say, a successful logo like Polo’s isn’t easy to create. But having attained and maintained such a level of familiarity, that logo may now be as effective as any of Ralph Lauren’s seductive ads — and for exactly the opposite reason: Not because it catches our attention, but because it doesn’t.

Posted by Deric Bownds at 5:00 AM
Email ThisBlogThis!Share to TwitterShare to FacebookShare to Pinterest
Blog Categories: culture/politics