Clever experiment: distinction of self and other in mirroring motor neurons.

Extravagant claims have been made about systems of neurons that are active both during execution of a motion or emotion and observing others doing the same thing. (Example: Ramachandran's "Mirrors Neurons will do for psychology what DNA did for Biology."). They are suggested to be a basis of empathy and the development of language.

The fact that the brain might represent others' actions like one's own raise the issue of how we distinguish self from other. What keeps us from constantly miming the actions of others? (This happens in echopraxia, the involuntary repetition or imitation of the observed movements of others.) Schütz-Bosbach et al have done a very clever experiment to examine this by manipulating the sense of body ownership (using the “rubber-hand illusion”) to compare effects of observing actions that either were or were not illusorily attributed to the subject's own body. 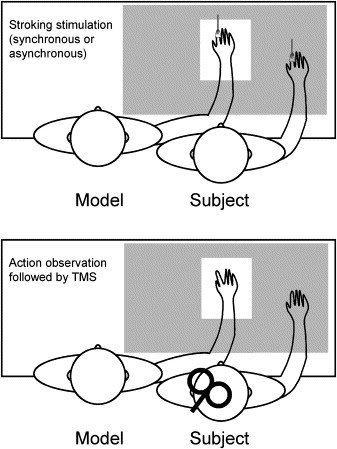 "When subjects watch a rubber hand being stroked while they feel synchronous stroking of their own unseen hand, they feel that the rubber hand becomes part of their body. Identical asynchronous stroking has no effect. Thus, the sense of owning the rubber hand requires congruence of visual and tactile stimulation. The neural counterparts of this sense of ownership have been identified in premotor and sensorimotor cortices. The rubber-hand illusion therefore allows balanced comparison between the self and the other because a single stimulus (here, the hand of another person rather than a rubber hand) is either linked to the self or not depending on the pattern of previous stimulation. We used a real human hand instead of the conventional rubber hand because several studies show stronger mirroring effects for viewing a live action than for viewing artificial equivalents."

They show that observing another's actions facilitated the motor system, whereas observing identical actions, which were illusorily attributed to the subject's own body, showed the opposite pattern. Thus, motor facilitation strongly depends on the agent to whom the observed action is attributed. This result contradicts previous concepts of equivalence between one's own actions and actions of others and suggests that social differentiation, not equivalence, is characteristic of the human action system.... "This suggests that the neural mechanisms underlying action observation are intrinsically social. These mechanisms map the actions of others to corresponding actions on one's own body but do not simply represent the other agent as a derivative of, or even an equal to, the self." In contrast, there appears to be an agent-specific representation in the primary motor cortex.
Posted by Deric Bownds at 11:10 AM
Email ThisBlogThis!Share to TwitterShare to FacebookShare to Pinterest
Blog Categories: acting/choosing, mirror neurons, self, social cognition