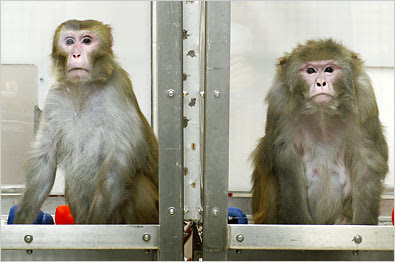 Mason writes an interesting review in the New York Times 10/31/06 science section focusing on experiments at the University of Wisconsin Primate research center which have closely monitored rhesus monkeys on restricted and normal-calorie diets. Fifty animals survive from the original group of 76, the differences are just now becoming apparent in the older animals. Here are some edited clips from that article:

In a laboratory at the Wisconsin National Primate Research Center, Matthias, the monkey on the right, is learning about time’s caprice the hard way. At 28, getting on for a rhesus monkey, Matthias is losing his hair, lugging a paunch and getting a face full of wrinkles. Yet in the cage next to his, gleefully hooting at strangers, one of Matthias’s lab mates, Rudy, is the picture of monkey vitality, although he is slightly older. Thin and feisty, Rudy stops grooming his smooth coat just long enough to pirouette toward a proffered piece of fruit.

Those on normal diets, like Matthias, are beginning to show signs of advancing age similar to those seen in humans. Three of them, for instance, have developed diabetes, and a fourth has died of the disease. Five have died of cancer.

But Rudy and his colleagues on low-calorie meal plans are faring better. None have diabetes, and only three have died of cancer. It is too early to know if they will outlive their lab mates, but the dieters here and at the other labs also have lower blood pressure and lower blood levels of certain dangerous fats, glucose and insulin.

Researchers at Washington University in St. Louis have been tracking the health of small groups of calorie-restricted dieters. Earlier this year, they reported that the dieters had better-functioning hearts and fewer signs of inflammation, which is a precursor to clogged arteries, than similar subjects on regular diets.

Some doubt that calorie restriction can ever work effectively in humans,and that it will make people miserable in the process of attempting it. A mathematical model published last year predicted that the maximum life span gain from calorie restriction for humans would be just 7 percent. A more likely figure, the authors said, was 2 percent.
Posted by Deric Bownds at 10:58 AM
Email ThisBlogThis!Share to TwitterShare to FacebookShare to Pinterest
Blog Categories: aging