What we see is biased by ongoing neural activity.

Rassi et al. (open source) show that ongoing neural activity in our brain, as in the fusiform face area, can influence what we perceive in an ambiguous sensory stimulus such as the Rubin face/vase illusion. 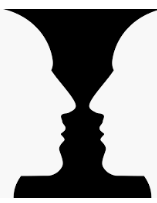 
Ongoing neural activity influences stimulus detection—that is, whether or not an object is seen. Here, we uncover how it could influence the content of what is seen. In ambiguous situations, for instance, ongoing neural fluctuations might bias perception toward one or the other interpretation. Indeed, we show increased information flow from category-selective brain regions (here, the fusiform face area [FFA]) to the primary visual cortex before participants subsequently report seeing faces rather than a vase in the Rubin face/vase illusion. Our results identify a neural connectivity pathway that biases future perception and helps determine mental content.


Ongoing fluctuations in neural excitability and in networkwide activity patterns before stimulus onset have been proposed to underlie variability in near-threshold stimulus detection paradigms—that is, whether or not an object is perceived. Here, we investigated the impact of prestimulus neural fluctuations on the content of perception—that is, whether one or another object is perceived. We recorded neural activity with magnetoencephalography (MEG) before and while participants briefly viewed an ambiguous image, the Rubin face/vase illusion, and required them to report their perceived interpretation in each trial. Using multivariate pattern analysis, we showed robust decoding of the perceptual report during the poststimulus period. Applying source localization to the classifier weights suggested early recruitment of primary visual cortex (V1) and ∼160-ms recruitment of the category-sensitive fusiform face area (FFA). These poststimulus effects were accompanied by stronger oscillatory power in the gamma frequency band for face vs. vase reports. In prestimulus intervals, we found no differences in oscillatory power between face vs. vase reports in V1 or in FFA, indicating similar levels of neural excitability. Despite this, we found stronger connectivity between V1 and FFA before face reports for low-frequency oscillations. Specifically, the strength of prestimulus feedback connectivity (i.e., Granger causality) from FFA to V1 predicted not only the category of the upcoming percept but also the strength of poststimulus neural activity associated with the percept. Our work shows that prestimulus network states can help shape future processing in category-sensitive brain regions and in this way bias the content of visual experiences.


Posted by Deric Bownds at 12:00 AM
Email ThisBlogThis!Share to TwitterShare to FacebookShare to Pinterest
Blog Categories: attention/perception, vision