I have read through Arthur Brooks' new book, "Love your Enemies," which addresses the many facets of our current political polarization, with the goal of suggesting some ways to ameliorate our current impasse. While I'm tempted to pass on an abstracted version of the main points of each of the book chapters, as I have done for several other books that have influenced me, I'm going to restrict myself to passing on some clips from Chapter 4 "How Can I Love my Enemies if They are Immoral," in which he does a nice summary of the ideas and work of Jonathan Haidt. At the end of the clips I attach a graphic from one of Haidt's lectures that summarizes his findings.


...“moral foundations theory,”... specifically addresses how conservatives and liberals differ in their moral views. Haidt was finding that certain ideas of morality are innate and that “the worst idea in all of psychology is the idea that the mind is a blank slate at birth.”* His research showed that we are in fact born with particular moral foundations that make it easy for us to learn certain ideas of right and wrong, and hard to learn others. Using survey data for hundreds of thousands of individuals, Haidt was finding that there are in fact five innate moral values that exist among humans of all races and cultures, which he calls the “five foundations of morality.” They are: (1) fairness, (2) care for others, (3) respect for authority, (4) loyalty to one’s group, and (5) purity or sanctity. (Later, he added liberty to the list.) Haidt’s research has shown that of these five moral foundations, the first two—fairness and care—are nearly universal. Except for sociopaths, almost everyone—conservative or liberal, young or old, religious or nonreligious—believes in fairness and compassion to others.

Conservatives look at all this and often conclude that liberals are less moral than they are, but the science shows this is not true. Liberals are not less moral; they simply have fewer moral foundations. According to Haidt’s research, “Liberals have a kind of a two-channel, or two-foundation morality” while “conservatives have more of a . . . five-channel morality.” All of us, regardless of where we sit on the political spectrum, care about social morality, treating others with fairness and compassion. By contrast, personal moral values, such as sexual purity, respect for authority, and tribal loyalty—to which conservative politicians often give greater emphasis—resonate deeply with only a part of the population. When it comes to loyalty, authority, and purity, conservatives are from Mars, and liberals are from Venus. Or vice versa, I’m not sure. I just know it’s different planets.

Even in an age that celebrates diversity, most people assiduously avoid those who hold different moral values. Indeed, people avoid those with different values more than they do people of different racial backgrounds. In one study with undergraduate students, Haidt and his colleagues found that “in fraternity admissions, fraternity brothers were happy to admit people who were demographically different from themselves, although they avoided candidates who had strong moral or political values that differed either from the group as a whole, or from themselves as individuals.” He also found that in choosing a study partner, most undergraduates did not care about racial differences, “but political/moral differences generally made a candidate less attractive.” Haidt’s work is consistent with more recent research that shows the starkest dividing line in America today is not race, religion, or economic status, but rather party affiliation. In fact, scholars at Stanford and Princeton have found that political partisans in America now take a more discriminatory view of those in the opposing party than they do of people of other races.

You may be genetically predisposed to a conservative, five-channel moral foundation, but that doesn’t mean you have to be a conservative if your intellect tells you otherwise. Think deeply. Listen to the other side. Reflect on what others are saying. Then ask yourself not just how you feel, but what you think is right. We’re not slaves. We’re not shackled to a pipe in the basement of our own built-in genetic morality. In his book The Birth of the Mind, the eminent brain scientist Gary Marcus writes, “‘Built-in’ does not mean unmalleable; it means organized in advance of experience.” When it comes to our moral outlook, Marcus says, “Nature provides a first draft, which experience then revises.” It is up to each of us to create the next drafts of our moral minds. We should constantly be evaluating whether our particular expression of our moral values is the right one, much less the only legitimate expression of those values. Doing so requires the humility to recognize that none of us has a monopoly on truth. The left favors redistribution; the right, meritocracy. But if we had a completely redistributionist society we’d be the Soviet Union; if we had a complete meritocracy, millions would be starving. There is a sweet spot between the two and we should all be searching together to find it. 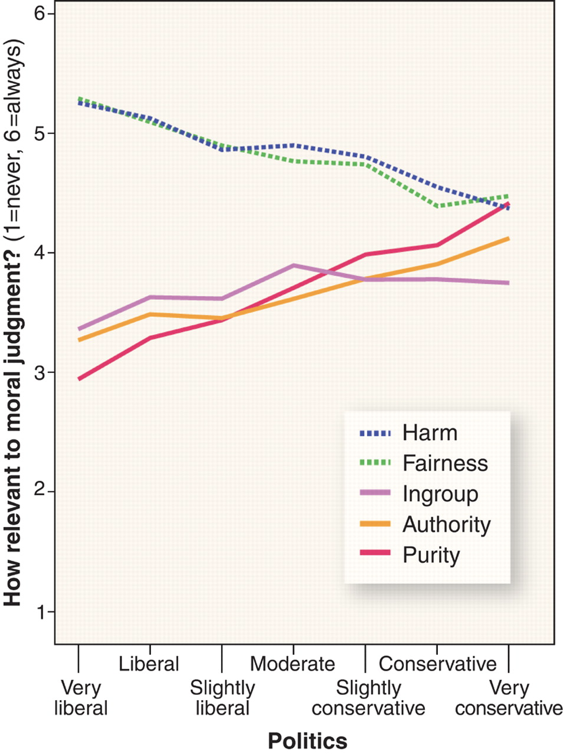 Posted by Deric Bownds at 12:00 AM
Email ThisBlogThis!Share to TwitterShare to FacebookShare to Pinterest
Blog Categories: culture/politics, emotions, morality