Ready to pounce - Cat smarts get some attention

I live in a symbiotic relationship with my two Abyssinian cats, and so was gratified, given that canine social cognition is the subject of dozens of scientific papers, to see that feline cognition is beginning to get more attention. One simple reason for the difference is that dogs want to please humans and cooperate with experimenters, while cats could generally care less, and after a few trials will walk away from earnest efforts to engage their responses. When a human points at something, a chimp will not react, but a dog, like a human toddler, knows to look at the same thing. Turns out that cats do the same thing, they will trot over to a bowl that a human points to. It is turning out that cats match dogs in many tests of social smarts. Alas, I'm going to show you a cat video... not of some adorable feline faux pas, but of behavioral work being done with cats:

And, since I'm showing cat pictures, I can't resist introducing you to Abyssinians Marvin and Melvin, shown napping while I'm driving between Madison WI and Austin TX. 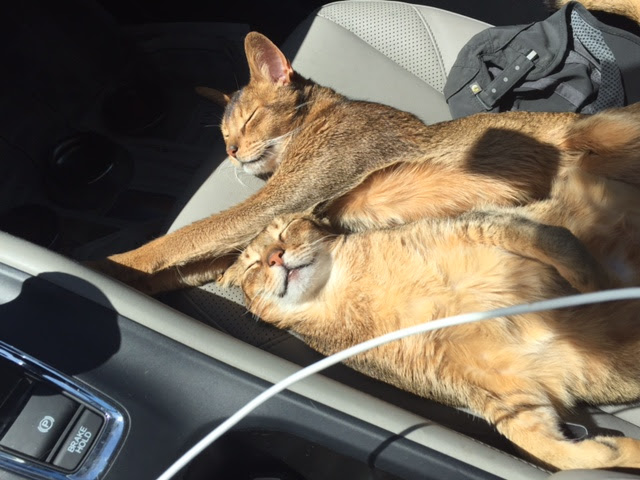 Posted by Deric Bownds at 12:00 AM
Email ThisBlogThis!Share to TwitterShare to FacebookShare to Pinterest
Blog Categories: animal behavior