I want to recommend Chapter 5 of Michael Pollan's recent book "How to change your mind," on the neuroscience of the psychedelic experience, as an excellent description of the functions of the default mode network (DMN) of our brain mentioned in the previous post. Pollan points to a 2014 article by Carhart-Harris et al. (open source, which I regret not having been aware of earlier) titled "The entropic brain: a theory of conscious states informed by neuroimaging research with psychedelic drugs." The article presents evidence that the DMN is the core component of our self or ego. It's activity is reduced during the psychedelic experience, during meditation by experienced meditators, and in young children who have not yet formed strong egos, allowing the expression of a more open and naive primary kind of consciousness. This primary consciousness is more disorganized, has higher entropy. The DMN is a secondary sort of consciousness that normally inhibits this primary consciousness to enforce a stable ego and lower entropy. The Carhart-Harris et al. article is quite long and dense, so the authors try to condense their points down to a summary graphic that I though worth passing on to MindBlog readers (click to enlarge): 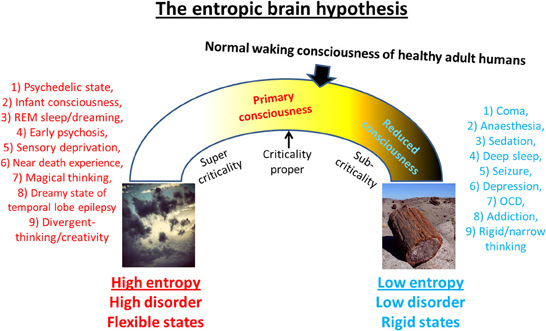 Legend - This schematic is intended to summarize much of what this paper has tried to communicate. It shows an “inverted u” relationship between entropy and cognition such that too high a value implies high flexibility but high disorder, whereas too low a value implies ordered but inflexible cognition. It is proposed that normal waking consciousness inhabits a position that is close to criticality but slightly sub-critical and primary states move brain activity and associated cognition toward a state of increased system entropy i.e., brain activity becomes more random and cognition becomes more flexible. It is proposed that primary states may actually be closer to criticality proper than secondary consciousness/normal waking consciousness.

Posted by Deric Bownds at 12:00 AM
Email ThisBlogThis!Share to TwitterShare to FacebookShare to Pinterest
Blog Categories: consciousness