I want to pass on the abstract, along with a bit of text and two figures, from an article by Coalson, Van Essen, and Glasser that argues for a fundamental change is how functional cortical areas of the brain are recorded and reported.  They demonstrate that surface based parcellation is 3-fold more accurate than traditional volume based parcellations.:


Most human brain-imaging studies have traditionally used low-resolution images, inaccurate methods of cross-subject alignment, and extensive blurring. Recently, a high-resolution approach with more accurate alignment and minimized blurring was used by the Human Connectome Project to generate a multimodal map of human cortical areas in hundreds of individuals. Starting from these data, we systematically compared these two approaches, showing that the traditional approach is nearly three times worse than the Human Connectome Project’s improved approach in two objective measures of spatial localization of cortical areas. Furthermore, we demonstrate considerable challenges in comparing data across the two approaches and, as a result, argue that there is an urgent need for the field to adopt more accurate methods of data acquisition and analysis.


Localizing human brain functions is a long-standing goal in systems neuroscience. Toward this goal, neuroimaging studies have traditionally used volume-based smoothing, registered data to volume-based standard spaces, and reported results relative to volume-based parcellations. A novel 360-area surface-based cortical parcellation was recently generated using multimodal data from the Human Connectome Project, and a volume-based version of this parcellation has frequently been requested for use with traditional volume-based analyses. However, given the major methodological differences between traditional volumetric and Human Connectome Project-style processing, the utility and interpretability of such an altered parcellation must first be established. By starting from automatically generated individual-subject parcellations and processing them with different methodological approaches, we show that traditional processing steps, especially volume-based smoothing and registration, substantially degrade cortical area localization compared with surface-based approaches. We also show that surface-based registration using features closely tied to cortical areas, rather than to folding patterns alone, improves the alignment of areas, and that the benefits of high-resolution acquisitions are largely unexploited by traditional volume-based methods. Quantitatively, we show that the most common version of the traditional approach has spatial localization that is only 35% as good as the best surface-based method as assessed using two objective measures (peak areal probabilities and “captured area fraction” for maximum probability maps). Finally, we demonstrate that substantial challenges exist when attempting to accurately represent volume-based group analysis results on the surface, which has important implications for the interpretability of studies, both past and future, that use these volume-based methods.

Some context from their introduction:


The recently reported HCP-MMP1.0 multimodal cortical parcellation (https://balsa.wustl.edu/study/RVVG, see the graphic below) contains 180 distinct areas per hemisphere and was generated from hundreds of healthy young adult subjects from the Human Connectome Project (HCP) using data precisely aligned with the HCP’s surface-based neuroimaging analysis approach. Each cortical area is defined by multiple features, such as those representing architecture, function, connectivity, or topographic maps of visual space. This multimodal parcellation has generated widespread interest, with many investigators asking how to relate its cortical areas to data processed using the traditional neuroimaging approach. Because volume-registered analysis of the cortex in MNI space is still widely used, this has often translated into concrete requests, such as: “Please provide the HCP-MMP1.0 parcellation in standard MNI volume space.” Here, we investigate quantitatively the drawbacks of traditional volume-based analyses and document that much of the HCP-MMP1.0 parcellation cannot be faithfully represented when mapped to a traditional volume-based atlas.

Here is a graphic from the parcellation analysis 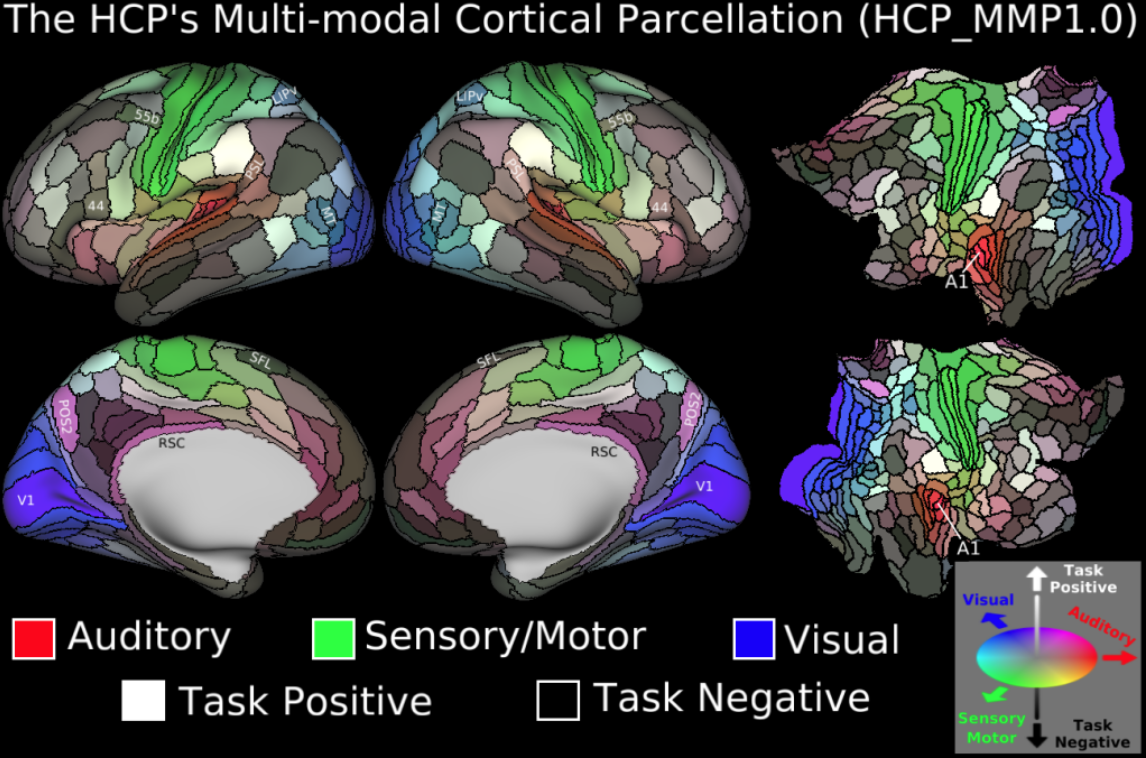 And here is Figure 1 and its explanation from the Coalson et al. paper.

The figure shows a probabilistic maps of five exemplar areas spanning a range of peak probabilities. Each area is shown as localized by areal-feature–based surface registration (Lower, Center), and as localized by volume-based methods. One area (3b in Fig. 1) has a peak probability of 0.92 in the volume (orange, red), whereas the other four have volumetric peak probabilities in the range of 0.35–0.7 (blue, yellow). Notably, the peak probabilities of these five areas are all higher on the surface (Figure, Lower, Center) (range 0.90–1) than in the volume, indicating that MSMAll nonlinear surface-based registration provides substantially better functional alignment across subjects than does nonlinear volume-based registration.

Posted by Deric Bownds at 3:00 AM
Email ThisBlogThis!Share to TwitterShare to FacebookShare to Pinterest
Blog Categories: acting/choosing, attention/perception, technology