A brief review in PNAS points to an article by Meyer et.al.:


Mood changes have been linked to seasonality, but little is known about how other human brain functions may vary according to the seasons. Christelle Meyer et al. measured the cognitive brain function of 28 volunteers at different times of the year. For each testing period, each participant spent 5 days in the laboratory, devoid of seasonal cues, such as daylight, and without access to the external world. At the end of the 5-day period, the authors used functional MRI to assess sustained attention and higher executive function in two separate tasks. Performance on both tasks remained constant, but the brain resources used to complete each task changed with the seasons. Brain activity related to sustained attention peaked in June near the summer solstice and was lowest near the winter solstice. In contrast, working memory-related brain activity, a higher-order task, peaked in fall and was lower near the spring equinox. The authors report that these results did not correlate with endocrine measures, such as melatonin, or neurophysiological measures of alertness and sleep. According to the authors, in addition to daily circadian rhythms, certain brain functions may be more seasonal than previously appreciated and that seasonal rhythmicity may be specific to the cognitive process. 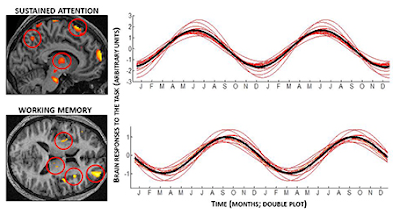 Posted by Deric Bownds at 3:00 AM
Email ThisBlogThis!Share to TwitterShare to FacebookShare to Pinterest
Blog Categories: attention/perception, memory/learning