Over the past few weeks, I've been scanning the titles of old MindBlog posts (all 2,588 of them, taken 300 at a time because fatigue sets in very quickly in such an activity), glancing through the contents of the ones I recall as being most interesting to me, and assembling a list of ~80 reflecting some major themes. I am struck by the number of REALLY INTERESTING items that I had COMPLETELY forgotten about. (An illustration is the paragraph starting below with the graphic which is a repeat of a post from May 30, 2007.) It frustrates me that I have lost from recall so much good material. And, of course, it is also frustrating that the insight we do mange to retain will not necessarily change us (the subject of this March 23, 2006 post.) 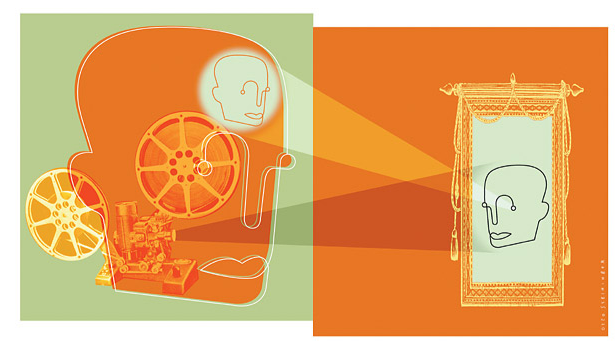 Benedict Carey writes a piece in the Tuesday NY Times science section (PDF here) reviewing work done by a number of researchers on on how the stories people tell themselves (and others) about themselves do or don't help with making adaptive behavior changes. Third person narratives, in which subjects view themselves from a distance - as actors in their own narrative play - correlate with a higher sense of personal power and ability to make personality changes. First person narratives - in which the subject describes the experience of being immersed in their personal plays - are more likely than third person narratives to correlate with passivity and feeling powerless to effect change. This reminds me of Marc Hauser's distinction of being a moral agent or a moral patient. The third person can be a more metacognitive stance, thinking about oneself in a narrative script while the first person can be a less reflective acting out of the script.
Posted by Deric Bownds at 9:02 AM
Email ThisBlogThis!Share to TwitterShare to FacebookShare to Pinterest
Blog Categories: deric, morality, psychology, self, self help