Actually, the original title of this MindBlog post on June 11, 2013 was "Changes as an autonomic nervous system ages 11 years - The "Wild Divine" is a bit less wild." - I'm reviewing old MindBlog posts (very slowly, as it turns out) and in most cases resisting the temptation to re-post even ones I thinks are quite interesting. This personal one really hit me, owever, so I pass it on, wondering how much further the noted decrease in my ability to regulate autonomic nervous system parameters has progressed by age 78:

Just after I retired from being a Univ. of Wisconsin department chair in 2001 I bought a set of finger sensors that fit on one's three middle fingers to report skin conductance and heartbeat to a PC or MAC via an A/D converter. These were part of a package with several CDs that installed a new age game on the computer that lead you through a rich environment of classical greek temples and waterfalls, attended by soothing music, that presented tasks in which you dinked with your own heart rate variability and sympathetic (arousing)/parasympathetic (calming) balance, going alternatively through periods of calm and arousal. I thought it was a hoot, and took the time to go through the "Journey to Wild Divine: passage" and "Journey to Wild Divine: Wisdom Quest."

Some of the current incarnations of these programs have moved to web browsers. Over the years a number of heavy weight new age gurus have signed on with their wares - Deepak Chopra, Dean Ornish, and Andrew Weil (Weil was in my Harvard graduating class...I'm tempted, but I won't burden you with my jaded opinion of this class of entrepreneurs, particularly Mr. Chopra.)

The main point of this post is note my experience on pulling out the finger sensors after 11 years trying the same exercises in their new presentation. What's the difference when this 71 year old tries the same manipulations of calm and arousal that the 60 year old played with with 11 years earlier? In a nutshell, I have less command over heart rate variability, which is lower, as the swings between calm and arousal have less amplitude. 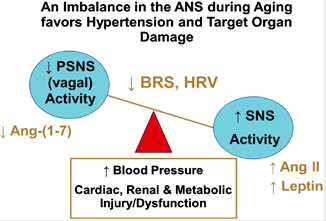 Schematic of proposed features associated with the imbalance in the autonomic nervous system during aging. During aging there is a shift in the balance of the autonomic nervous system (ANS) towards the sympathetic nervous system (SNS). This may be influenced by circulating or local brain levels of angiotensin (Ang) II and leptin. The lower activity of the parasympathetic nervous system (PSNS) is proposed to result at least in part from an age-related decline in Angiotensin-(1–7). Lower Angiotensin-(1–7) and higher Ang II or leptin in the brain medulla would predispose to a decline in baroreceptor reflex sensitivity (BRS) for control of heart rate and heart rate variability (HRV), both of which are associated with aging. Moreover, impairments in BRS and HRV can contribute to target organ damage, including metabolic dysfunction, with or without an increase in blood pressure.


If you're inclined, like Mr. Dylan Thomas, to not "go gently into that good night" you can find numerous sources (example here) on slowing these aging changes, usually by some sort of physical movement or stimulation.
Posted by Deric Bownds at 12:00 AM
Email ThisBlogThis!Share to TwitterShare to FacebookShare to Pinterest
Blog Categories: aging, meditation