Brain correlates of the muting of our emotions as we age.

My boyfriend in the early 19980’s was a pharmacy graduate student whose t-shirt read “Drugs are my life.” If I were to wear such a t-shirt now it would read “Hormones and neurotransmitters are my life.” I increasingly feel that all this verbal stuff we do - chattering in person or in the electronic ether, writing blogs, etc. - is a superficial veneer, noise on top of what is really running the show, which is the waxing and waning of hormones and neurotransmitters directed by an “it”, a martian inside us utterly running its own show. These compounds regulate our assertiveness versus passivity , our trust versus mistrust, our anxiety versus calm, our pleasure during antipication and reward. (They function, respectively, in neural systems that use testosterone, oxytocin, adrenaline, and dopamine.). The swings in these systems become less dramatic as we 'mellow' with aging.

Dreher et al. have published an interesting bit of work that deals specifically with the muting of the intensity of the pleasures we feel during anticipation and reward, in their article on “Age-related changes in midbrain dopaminergic regulation of the human reward system.” Their data show what is going on as we experience less excitement at opening a present when we are 60 than when we are 10 years old. There are changes in the brain's production of dopamine, which plays a central role in our reward system, as well as in which parts of the brain respond to it, and by how much they respond. (a recent brief article on dopamine and the reward system of the brain is here.) Here is their abstract, followed by a figure from the paper.


The dopamine system, which plays a crucial role in reward processing, is particularly vulnerable to aging. Significant losses over a normal lifespan have been reported for dopamine receptors and transporters, but very little is known about the neurofunctional consequences of this age-related dopaminergic decline. In animals, a substantial body of data indicates that dopamine activity in the midbrain is tightly associated with reward processing. In humans, although indirect evidence from pharmacological and clinical studies also supports such an association, there has been no direct demonstration of a link between midbrain dopamine and reward-related neural response. Moreover, there are no in vivo data for alterations in this relationship in older humans. Here, by using 6-[18F]FluoroDOPA (FDOPA) positron emission tomography (PET) and event-related 3T functional magnetic resonance imaging (fMRI) in the same subjects, we directly demonstrate a link between midbrain dopamine synthesis and reward-related prefrontal activity in humans, show that healthy aging induces functional alterations in the reward system, and identify an age-related change in the direction of the relationship (from a positive to a negative correlation) between midbrain dopamine synthesis and prefrontal activity. These results indicate an age-dependent dopaminergic tuning mechanism for cortical reward processing and provide system-level information about alteration of a key neural circuit in healthy aging. Taken together, our findings provide an important characterization of the interactions between midbrain dopamine function and the reward system in healthy young humans and older subjects, and identify the changes in this regulatory circuit that accompany aging. 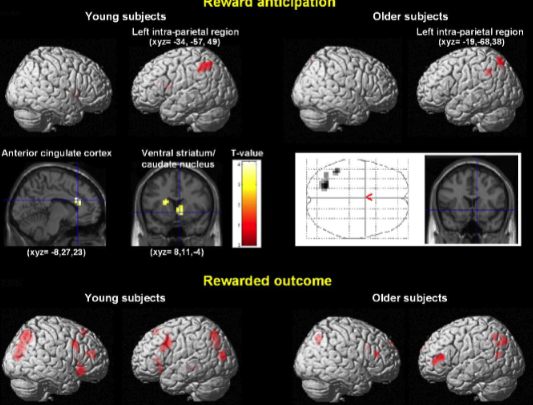 Posted by Deric Bownds at 12:00 AM
Email ThisBlogThis!Share to TwitterShare to FacebookShare to Pinterest
Blog Categories: aging, emotion, emotions