The evolution of dance


Evidence from multiple sources reveals a surprising link between imitation and dance. As in the classical correspondence problem central to imitation research, dance requires mapping across sensory modalities and the integration of visual and auditory inputs with motor outputs. Recent research in comparative psychology supports this association, in that entrainment to a musical beat is almost exclusively observed in animals capable of vocal or motor imitation. Dance has representational properties that rely on the dancers’ ability to imitate particular people, animals or events, as well as the audience’s ability to recognize these correspondences. Imitation also plays a central role in learning to dance and the acquisition of the long sequences of choreographed movements are dependent on social learning. These and other lines of evidence suggest that dancing may only be possible for humans because its performance exploits existing neural circuitry employed in imitation. 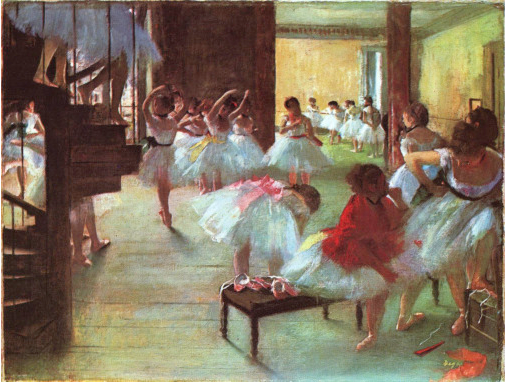 Clips from the body of the article, with another figure:


...there can be no doubt that, compared to other animals, humans are exceptional imitators. It may be no coincidence that a recent PET scan analysis of the neural basis of dance found that foot movement to music excited regions of neural circuitry (e.g. the right frontal operculum) previously associated with imitation. Dancing may only be possible because its performance exploits the neural circuitry employed in imitation. Such reasoning applies equally where individuals dance alone; unlike much human behavior, dancing inherently seems to require a brain capable of solving the correspondence problem. 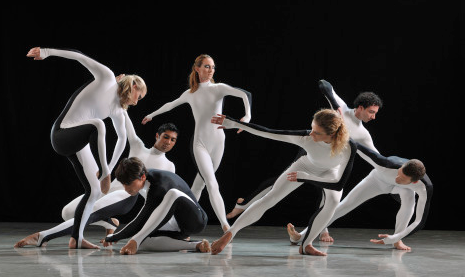 Dance often tells a story, and this representational quality provides another link with imitation. For instance, in the astronomical dances of ancient Egypt, priests and priestesses, accompanied by harps and pipes, mimed significant events in the story of a god or imitated cosmic patterns, such as the rhythm of night and day. Africa, Asia, Australasia and Europe all possess long-standing traditions for masked dances, in which the performers portray the character associated with the mask and enact religious stories. Native Americans have many animal dances, such as the Buffalo dance, which was thought to lure buffalo herds close to the village, and the eagle dance, which is a tribute to these revered birds. This tradition continues to the present. In 2009, Rambert (formerly the Rambert Dance Company), a world leader in contemporary dance, marked the bicentenary of Charles Darwin’s birth and 150th anniversary of his seminal work On the Origin of Species by collaborating with one of us (N.C.) to produce Comedy of Change (Figure above), which evoked animal behaviour on stage with spellbinding accuracy. In all such instances, the creation and performance of the dance requires an ability on the part of the dancer to imitate the movements and sounds of particular people, animals, or events. Such dances re-introduce the correspondence problem, as the dancer, choreographer and audience must be able to connect the dancers’ movements to the target phenomenon they represent.