You should check Steven Rattner's interesting commentary asking what we owe to those on the losing end of globalization:

Percent change in number of US employees in each industry, 2000 to 2015 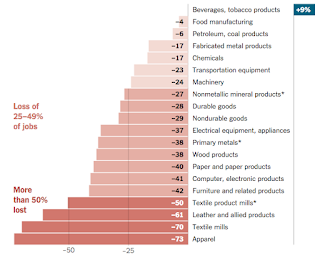 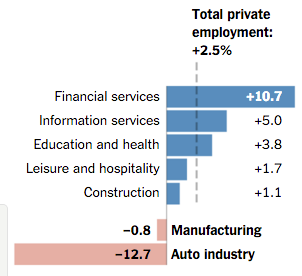 Not surprisingly, the shifts shown in these graphs are ending badly politically. The 'losers' form a core of support for both Donald Trump and Ted Cruz.

Mr. Trump has found an audience with Americans disgruntled by the rapid, disorderly change they associate with national decline and their own uncertain prospects. Policies be damned, who better to set things right than the defiant strong man who promises by sheer force of will to make America great again?

Open-seat presidential elections are shaped by perceptions of the style and personality of the outgoing incumbent. Voters rarely seek the replica of what they have. They almost always seek the remedy, the candidate who has the personal qualities the public finds lacking in the departing executive...who among the Republicans is more the antithesis of Mr. Obama than the trash-talking, authoritarian, give-no-quarter Mr. Trump?
Posted by Deric Bownds at 3:00 AM
Email ThisBlogThis!Share to TwitterShare to FacebookShare to Pinterest
Blog Categories: culture/politics, technology