Hsu and Jenkins summarize work of Hackel et al. showing where our brains learn about traits versus rewards.


In a functional magnetic resonance imaging (fMRI) study..., Hackel et al use an innovative combination of ideas and tools from social psychology, economics and cognitive neuroscience, they offer neural evidence that associative learning processes are involved in making inferences about traits. Specifically, the authors conducted a study in which participants interacted repeatedly with eight different partners: four purported human participants and four slot machines. On each trial, participants chose to interact with one of two human (or slot machine) counterparts. The chosen counterpart, who had been endowed with a certain number of points on that trial, then shared some proportion of those points with the participant. Critically, targets varied orthogonally in terms of the average magnitude of their starting endowment (reward) and the average proportion of the endowment that was shared with the participant (generosity), enabling the authors to dissociate signals associated with trait learning from those associated with reward processing.

Consistent with the idea that trait learning engages associative learning processes, BOLD (blood oxygen level-dependent) responses of the ventral striatum during an initial training phase were predicted by an associative learning model that captures both reward and trait information. Moreover, two pieces of evidence support the idea that participants were able to make use of this trait information in a manner described by psychological theories of trait attribution. First, in a test phase in which participants knew each potential partner's starting endowment, participants chose interaction partners on the basis of those partners' past levels of generosity, and the extent to which they did so was associated with activity in the ventromedial prefrontal cortex (see figure). In addition, participants exhibited a tendency to generalize these generosity attributions, preferring the more generous targets when asked to pick a collaborator for a new, cooperative task-a hallmark of trait attribution. 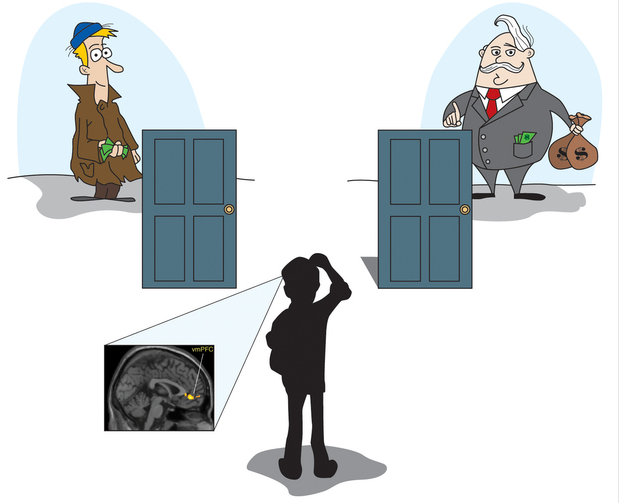 Figure: Learning about traits versus rewards.  In an fMRI study, participants interacted with partners who varied in reward (the absolute amount of money shared with the participant) and generosity (the proportion shared). Activity in the ventromedial prefrontal cortex (vmPFC) was associated with preferring more generous targets, even when those targets shared less money in absolute terms.

Posted by Deric Bownds at 3:00 AM
Email ThisBlogThis!Share to TwitterShare to FacebookShare to Pinterest
Blog Categories: acting/choosing, social cognition