Brain correlates of the impatience of adolescents.

Teens and young adults show greater impulsivity than children and adults, reflected by increases in emergency room visits, accidents from drug or alcohol use, and increased mortality risk. van den Bos et al. relate this to developmental changes in the structural and functional connectivity of different frontostriatal tracts. Participants made choices between smaller, sooner (SS)  and larger, later (LL) monetary rewards in a delay-discounting task. Accepting a delay for a larger, later reward correlated with prefrontal inhibition of areas in the striatum:


Adolescence is a developmental period associated with an increase in impulsivity. Impulsivity is a multidimensional construct, and in this study we focus on one of the underlying components: impatience. Impatience can result from (i) disregard of future outcomes and/or (ii) oversensitivity to immediate rewards, but it is not known which of these evaluative processes underlie developmental changes. To distinguish between these two causes, we investigated developmental changes in the structural and functional connectivity of different frontostriatal tracts. We report that adolescents were more impatient on an intertemporal choice task and reported less future orientation, but not more present hedonism, than young adults. Developmental increases in structural connectivity strength in the right dorsolateral prefrontal tract were related to increased negative functional coupling with the striatum and an age-related decrease in discount rates. Our results suggest that mainly increased control, and the integration of future-oriented thought, drives the reduction in impatience across adolescence.

This clip from one of the figures shows the relevant brain areas: 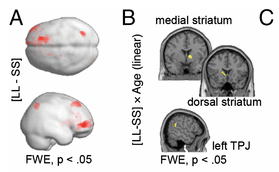 By the way, on the subject of adolescents, I'll point to another piece of work by Baker et. al. on developmental changes in brain network hub connectivity in late adolescence
Posted by Deric Bownds at 3:00 AM
Email ThisBlogThis!Share to TwitterShare to FacebookShare to Pinterest
Blog Categories: acting/choosing, human development, motivation/reward