Neuroanatomical correlates of the income-achievement gap.

The difference in academic achievement between students from higher- and lower-income backgrounds is substantial and growing. A group of collaborators from M.I.T., Harvard, and Columbia has examined the neuroanatomical correlates of the income-achievement gap by comparing the structure of the cerebral cortex (which supports perception, language, and thought) in public-school students who do (lower income) and do not (higher income) receive free or reduced-price lunch, and by relating this neuroanatomy to performance on standardized tests of academic skills. For further discussion of effects of poverty on young brains see the article by Ostrander in The New Yorker. 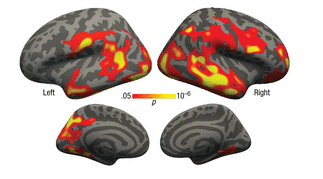 Cortical-thickness differences between income groups. The brain images in (a) show regions where cortical thickness was significantly greater in the higher-income (HI) group than in the lower-income (LI) group.

Posted by Deric Bownds at 3:00 AM
Email ThisBlogThis!Share to TwitterShare to FacebookShare to Pinterest
Blog Categories: culture/politics