Puglia et al. find that the epigenetic modification of methylating the DNA of the oxytocin receptor gene (OXTR) decreases the control of amygdala fear responses by brain regions involved in affect appraisal and emotion regulation. Thus individuals with higher levels of OXTR methylation are more reactive to negative emotional facial cues. Clips from their introduction:


A peripheral hormone and central neuromodulator, oxytocin influences a variety of social and affective processes including affiliative behaviors, care-giving, and stress reactivity. Intranasally administered, oxytocin has also been implicated in specialized components of social cognition, such as trust, envy, and mentalizing...One way oxytocin may influence behavior is through anxiety reduction; intranasal oxytocin has been shown to have anxiolytic effects on brain systems supporting affective responses to negatively arousing stimuli. These findings support oxytocin’s role in anxiety reduction and make it an attractive candidate in neurobiological models of psychiatric disorders...Methylation of 5′-Cytosine-phosphate-Guanine-3′ (CpG) dinucleotide pairs in DNA is a highly investigated epigenetic modification that may influence behavioral phenotypes. DNA methylation within the promoter region of OXTR is variable within the population, and methylation of specific OXTR CpG sites reduces transcription of the gene. High levels of OXTR methylation at these same sites have been associated with autism, callous unemotional traits, and anorexia nervosa, suggesting the utility of OXTR methylation as a biomarker of phenotypic variability.


In humans, the neuropeptide oxytocin plays a critical role in social and emotional behavior. The actions of this molecule are dependent on a protein that acts as its receptor, which is encoded by the oxytocin receptor gene (OXTR). DNA methylation of OXTR, an epigenetic modification, directly influences gene transcription and is variable in humans. However, the impact of this variability on specific social behaviors is unknown. We hypothesized that variability in OXTR methylation impacts social perceptual processes often linked with oxytocin, such as perception of facial emotions. Using an imaging epigenetic approach, we established a relationship between OXTR methylation and neural activity in response to emotional face processing. Specifically, high levels of OXTR methylation were associated with greater amounts of activity in regions associated with face and emotion processing including amygdala, fusiform, and insula. Importantly, we found that these higher levels of OXTR methylation were also associated with decreased functional coupling of amygdala with regions involved in affect appraisal and emotion regulation. These data indicate that the human endogenous oxytocin system is involved in attenuation of the fear response, corroborating research implicating intranasal oxytocin in the same processes. Our findings highlight the importance of including epigenetic mechanisms in the description of the endogenous oxytocin system and further support a central role for oxytocin in social cognition. This approach linking epigenetic variability with neural endophenotypes may broadly explain individual differences in phenotype including susceptibility or resilience to disease. 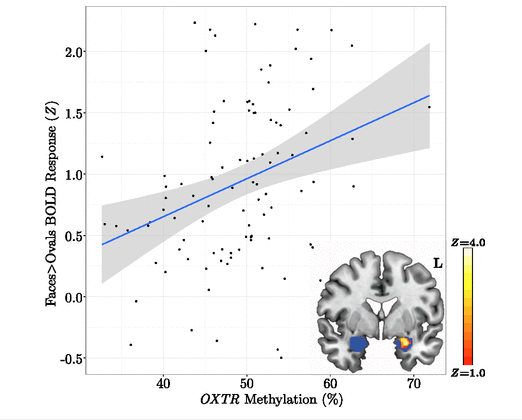 Posted by Deric Bownds at 3:00 AM
Email ThisBlogThis!Share to TwitterShare to FacebookShare to Pinterest
Blog Categories: fear/anxiety/stress, genes, social cognition