Heirarchies of empathy in the brain

Following the previous post I thought it would be useful to pass on more of Panskepp's review, which provides a more general description:


There is a growing recognition of how animals respond to the affective states of other animals, including the show of empathy, a state once thought to be unique to primates...A key question concerns the nature of the rats' motivations—the affective and cognitive underpinnings of their “empathy.” ...Future research needs to untangle whether empathic responses in mammals arise more from higher cognitive or lower affective brain functions, or some combination of these (see the figure). Human brain imaging studies of empathy suggest both are involved, especially in coping with the distress of others. But solid neurobiologically based evolutionary evidence, both bottom-up and top-down, is so far lacking. 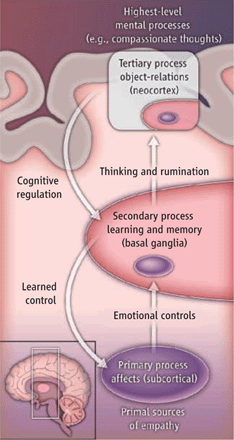 Figure legend - One concept of how mammalian brains generate empathic responses at different levels is shown. Primary emotional processes, where sources of empathy may arise (i.e., feeling what other organisms are feeling), coordinate with secondary-process learning and memory mechanisms (i.e., knowing what others are feeling). Both of these then interact with higher mental processes, which can exert a variety of top-down influences on the regulation of empathic tendencies (i.e., desires to respond compassionately to others' distress).

The layering of evolutionary progressions is evident in the human brain. The deepest midbrain and hypothalamic regions mediate primary-process, instinctual affects. More recently evolved subcortical regions, among them basal ganglia, amygdala, and nucleus accumbens, help promote higher cognitive activities through learning and memory. Although we currently look to mirror-neuron zones of the neocortex for evidence of the highest mind functions such as compassion, empathic tendencies are surely also promoted by the more ancient primary-process emotional networks that are essential foundations for mental life. For example, a primal form of “empathy” is mothers' exquisite sensitivity to crying babies. Might crying access those systems in mothers' brains that are known to mediate separation anxiety in young animals? Perhaps affective urges for maternal caregiving are triggered as mothers' brains experience psychological pain engendered by their infants' cries. It may be that empathic coordination of social motivations is mediated by emotional resonances among nearby animals, allowing receivers to experience the emotions of transmitters. At such deep affective levels, emotional states may reverberate among animals, with no need for learned rerepresentations arising from mirror neurons. Mammals may have intrinsic abilities to resonate with the pains and joys of nearby others through primal emotional contagion.

Much deep-brain research remains to be done to understand the degree to which mammalian empathy is achieved more through higher social-cognitive processes or primal affective processes in the brain. Simplified models of empathy, as in mice and rats, offer new inroads for understanding our own social-emotional nature and nurture. Such knowledge may eventually help us promote nurturant behaviors in humans.

Posted by Deric Bownds at 4:30 AM
Email ThisBlogThis!Share to TwitterShare to FacebookShare to Pinterest
Blog Categories: animal behavior, mirror neurons