God on the Brain 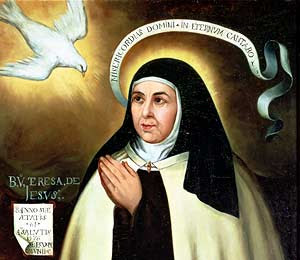 The Economist has a nice review and critical discussion of work by Mario Beauregard and collaborators at the Univ. of Montreal doing fMRI imaging of the brains of Carmelite nuns as they recall experiences of mystical union (by definition such experiences can not be summoned at will). The idea is based on the fact that imagining an experience usually activates the same brain regions that are active when the experience is actually taking place. Not surprisingly, there is no "God spot" in the brain, and activity in a number of brain regions, notably emotional areas, correlates with the recall of union. From their abstract in Neuroscience Letters (Volume 405, Issue 3 , 25 September 2006): "The brain activity of Carmelite nuns was measured while they were subjectively in a state of union with God. This state was associated with significant loci of activation in the right medial orbitofrontal cortex, right middle temporal cortex, right inferior and superior parietal lobules, right caudate, left medial prefrontal cortex, left anterior cingulate cortex, left inferior parietal lobule, left insula, left caudate, and left brainstem. Other loci of activation were seen in the extra-striate visual cortex. These results suggest that mystical experiences are mediated by several brain regions and systems."

Brain imaging has been to used to study a number of other altered states of consciousness, such as the phantom limb phenomenon and out of body experiences. Brain damage in the region of junction of the temporal and parietal lobes can alter perception of personal and extrapersonal space, and other studies have shown the changes in activation in this region correlates with meditative experiences of sensing sensing a greater interconnectedness of things, and dissolution of self into some larger entity.
Posted by Deric Bownds at 9:54 AM
Email ThisBlogThis!Share to TwitterShare to FacebookShare to Pinterest
Blog Categories: emotion, religion, self