Nathan Nunn does an article which describes how a substantial part of the world’s current income differences can be explained by the divergent effects of European contact globally, beginning in the late 15th century with Christopher Columbus’ arrival to the Americas in 1492, which resulted in a massive transfer of disease, food, ideas, and people between the Old World and the New World. The colonization of people of color by white Europeans and particularly the enslavement of black people starting ~500 year ago has left an enduring legacy that is hard to overcome.

I pass on Figure 1 from the paper and its discussion. It shows the evolution of economic prosperity, measured using the natural logarithm of real per capita gross domestic product, for different regions of the world from 1000 to 2000 CE. 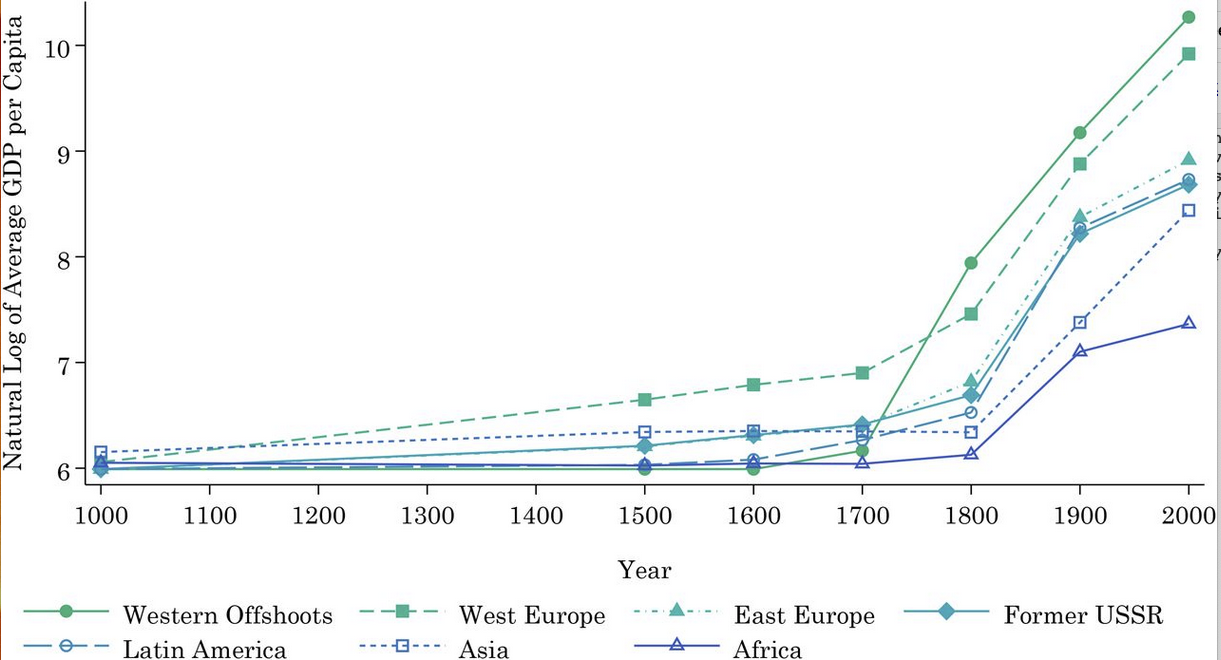 1) The best predictor of a region’s relative income in a period is its income in the years prior. A perfect predictor of the relative ranking of regional prosperity in 2000 is the ranking in 1800. If one considers income further back in time (e.g., 1500), one finds that it is still a very good indicator, although not a perfect one.

2) The sizable differences in relative incomes that we observe today have not always been present. (Today, the richest countries in the world are about 42 times as rich as the poorest.) These differences appear to have first emerged in 1500 and to have increased starting in the 18th century, a process that has been called the “Great Divergence” (2).

3) Although there is a remarkable amount of historical persistence in comparative development, there are some important exceptions. In particular, the region “Western European offshoots,” which comprises land that today is Canada, United States, Australia, and New Zealand, moves from being the poorest region of the world in 1600 (and before) to the richest in 1800 (and after).

Posted by Deric Bownds at 12:00 AM
Email ThisBlogThis!Share to TwitterShare to FacebookShare to Pinterest
Blog Categories: culture/politics