Nummenmaa et al.  do a massive job of data gathering whose purpose left me scratching my head on first sight...wondering why such an effort is useful.  But then, if someone asked me how I would describe my subjective experience  I wouldn't know where to start.  In the introduction to their open source article they "use the word feeling to simply refer to the current, subjectively accessible phenomenological state of an individual...Despite the centrality of subjective feelings to ourselves and our conscious well-being, the relative organization and determinants of different feelings have remained poorly understood. "  I pass on their abstract and a summary graphic from the article.


Subjective feelings are a central feature of human life. We defined the organization and determinants of a feeling space involving 100 core feelings that ranged from cognitive and affective processes to somatic sensations and common illnesses. The feeling space was determined by a combination of basic dimension rating, similarity mapping, bodily sensation mapping, and neuroimaging meta-analysis. A total of 1,026 participants took part in online surveys where we assessed (i) for each feeling, the intensity of four hypothesized basic dimensions (mental experience, bodily sensation, emotion, and controllability), (ii) subjectively experienced similarity of the 100 feelings, and (iii) topography of bodily sensations associated with each feeling. Neural similarity between a subset of the feeling states was derived from the NeuroSynth meta-analysis database based on the data from 9,821 brain-imaging studies. All feelings were emotionally valenced and the saliency of bodily sensations correlated with the saliency of mental experiences associated with each feeling. Nonlinear dimensionality reduction revealed five feeling clusters: positive emotions, negative emotions, cognitive processes, somatic states and illnesses, and homeostatic states. Organization of the feeling space was best explained by basic dimensions of emotional valence, mental experiences, and bodily sensations. Subjectively felt similarity of feelings was associated with basic feeling dimensions and the topography of the corresponding bodily sensations. These findings reveal a map of subjective feelings that are categorical, emotional, and embodied. 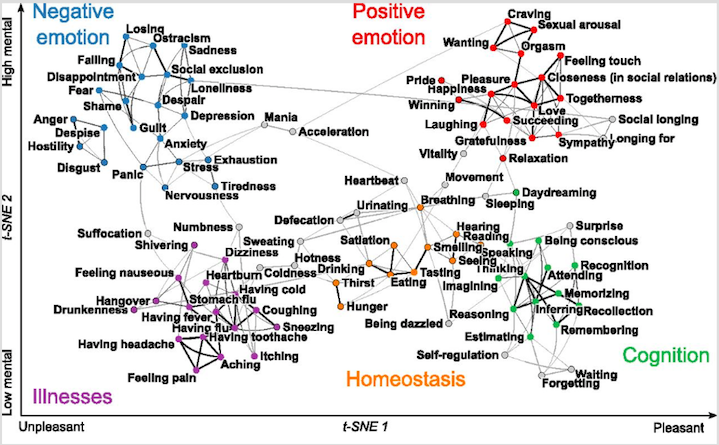 Posted by Deric Bownds at 3:22 AM
Email ThisBlogThis!Share to TwitterShare to FacebookShare to Pinterest
Blog Categories: emotion, emotions, fear/anxiety/stress, self