Semantics and the science of fear - the amygdala doesn't 'cause' fear.

Here are some core clips from an article in which Joseph Ledoux updates an idea he proposed several decades ago:


…that objectively measurable behavioral and physiological responses elicited by emotional stimuli were controlled nonconsciously by subcortical circuits, such as those involving the amygdala, while the conscious emotional experience was the result of cortical (mostly prefrontal) circuits that contribute to working memory and related higher cognitive functions. Building on a distinction emerging in the study of memory, I referred to these as implicit (nonconscious) and explicit (conscious) fear circuits

He has come to realize:


...that the implicit–explicit distinction had less traction in the case of emotions than in memory. The vernacular meaning of emotion words is simply too strong. When we hear the word ‘fear’, the default interpretation is the conscious experience of being in danger, and this meaning dominates. For example, although I consistently emphasized that the amygdala circuits operate nonconsciously, I was often described in both lay and scientific contexts as having shown how feelings of fear emerge from the amygdala. Even researchers working in the objective tradition sometimes appear confused about what they mean by fear; papers in the field commonly refer to ‘frightened rats’ that ‘freeze in fear’. A naïve reader naturally thinks of frightened rats as feeling ‘fear’. As noted above, using mental state terms to describe the function of brain circuits infects the circuit with surplus meaning (psychological properties of the mental state) and confusion invariably results.

Recently, I have … abandoned the implicit–explicit fear approach in favor of a conception that restricts the use of mental state terms to conscious mental states. I now only use ‘fear’ to refer to the experience of fear. It is common these days to argue that folk psychological ideas will be replaced with more accurate scientific constructs as the field matures. Indeed, for nonsubjective brain functions, subjective state labels should be eliminated. This is what I had in mind when I proposed calling the amygdala circuit a defensive survival circuit instead of a fear circuit (see Figure). However, the language of folk psychology describes conscious experiences, such as fear, just fine. 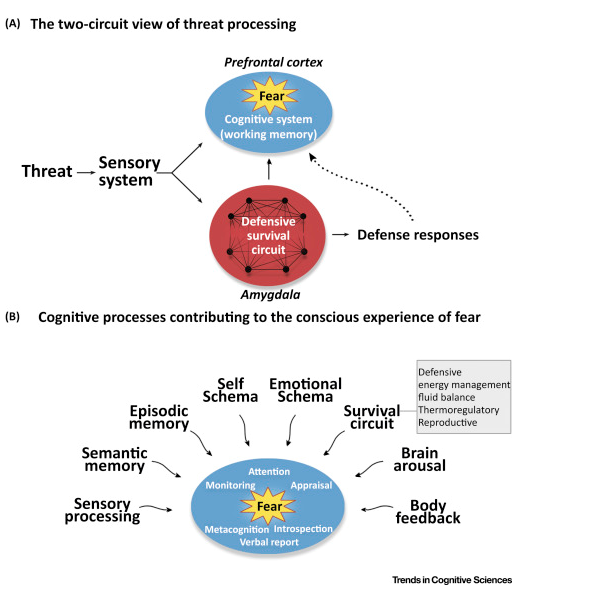 Figure - The Two-Circuit View of Threat Processing and the Experience of Fear. (A) In the two-circuit model, threats are processed in parallel by subcortical and cortical circuits. A subcortical defensive survival circuit centered on the amygdala initiates defensive behaviors in response to threats, while a cortical (mostly prefrontal) cognitive circuit underlying working memory gives rise to the conscious experience of fear. In many situations, survival circuit activity also contributes, albeit indirectly, to fearful feelings. (B) Conscious feelings of fear are proposed to emerge in the cortical circuit as a result of information integration in working memory, including information about sensory and various memory representations, as well as information from survival and arousal circuit activity within the brain, and feedback from body responses.

Psychology is different from other sciences, and has hurdles that they lack. Atoms do not study atoms, but minds study mental states and behaviors. When we engage in psychological research, we must take care to account for the prominent role of subjective experiences in our lives, while also being careful not to attribute subjective causes to behaviors controlled nonconsciously. Conflation of behavioral control circuits with subjective states by indiscriminate use of subjective state terms for both behavioral control circuits and conscious experiences is not a problem restricted to fear. It is present in many areas, including motivation, reward, pain, perception, and memory, to name a few obvious ones. Fear researchers, by addressing this issue, might well set an example that also paves the way for crisper conceptions in other areas of research.