Divided we fall - putting social progress on par with prosperity

Laura Levis, in Harvard Magazine, describes work of Porter and Stern, who have developed a social progress index that: 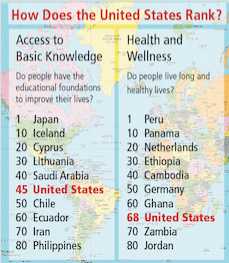 The United States may rank sixth among countries in terms of GDP per capita, but its results on the Social Progress Index are lackluster. It is sixteenth overall in social progress: well below Canada, the United Kingdom, Germany, and Japan in several key areas, including citizens’ quality of life and provision of basic human needs. The nation ranks thirtieth in personal safety, forty-fifth in access to basic knowledge, sixty-eighth on health and wellness, and seventy-fourth in ecosystem sustainability. “We had a lot of firsts in social progress over the years in America,” Porter points out, “but we kind of lost our rhythm and our momentum.”

About 20 or 30 years ago, for reasons Porter says he cannot completely explain, the rate of progress in America began to slow down. As a society, he points out, Americans slowly became more divided, and important priorities such as healthcare, education, and politics suffered. “We had gridlock, whether it’s unions or whether it’s ideological differences, and—although we’ve made some big steps in certain areas of human rights like gay rights—if you think about the really core things like our education system and our health system, we’re just not moving,” he says. “I think our political system isn’t helping, because we’re all about political gains and blocking the other guy, rather than compromising and getting things done.”

Posted by Deric Bownds at 3:00 AM
Email ThisBlogThis!Share to TwitterShare to FacebookShare to Pinterest
Blog Categories: culture/politics, happiness