Recent issues of Science Magazine have amazing reports of technology advances: a brain-like spiking-neuron integrated circuit on a 5.4 billion transistor chip with 4096 neurosynaptic cores (Markoff does a nice summary in the NYTimes) - said to be as fundamental an advance as the invention of the first transistor;  a self assembling robot that forms itself from a flat sheet (see review by Chang); and, if that's not enough for you, what about self-assembling hordes of mini robots.  (How long will it be before these treats become parts of weapons systems that find their way into the hands of tribal jihadists, like the current U.S. high-tech weaponry being used by the Islamic State of Iraq and Syria?).

I won't reproduce the article abstracts here, but pass on three visuals: 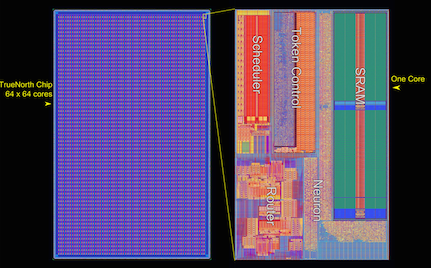 Second, a video of the self assembling robot.


And finally, Programmable self-assembly in a thousand-robot swarm.

Posted by Deric Bownds at 5:44 AM
Email ThisBlogThis!Share to TwitterShare to FacebookShare to Pinterest
Blog Categories: culture/politics, future, futures, technology