What distinguishes our minds from those of other creatures?

The September issue of the Scientific American (the 'Origins Issue') has an article by Marc Hauser in which he makes a list of what he considers distinctive human competencies (enter 'Hauser' in the search box in the left column to see my previous posts mentioning Hauser's work). Here is a clip from the article:

Although humans share the vast majority of their genes with chimps, studies suggest that small genetic shifts that occurred in the human lineage since it split from the chimp line produced massive differences in computational power. This rearranging, deleting and copying of universal genetic elements created a brain with four special properties. Together these distinctive characteristics, which I have recently identified based on studies conducted in my lab and elsewhere, constitute what I term our humaniqueness. The first such trait is generative computation, the ability to create a virtually limitless variety of “expressions,” be they arrangements of words, sequences of notes, combinations of actions, or strings of mathematical symbols. Generative computation encompasses two types of operation, recursive and combinatorial. Recursion is the repeated use of a rule to create new expressions. Think of the fact that a short phrase can be embedded within another phrase, repeatedly, to create longer, richer descriptions of our thoughts– for example, the simple but poetic expression from Gertrude Stein: “A rose is a rose is a rose.” The combinatorial operation, meanwhile, is the mixing of discrete elements to engender new ideas, which can be expressed as novel words (“Walkman”) or musical forms, among other possibilities.

The second distinguishing characteristic of the human mind is its capacity for the promiscuous combination of ideas. We routinely connect thoughts from different domains of knowledge, allowing our understanding of art, sex, space, causality and friendship to combine. From this mingling, new laws, social relationships and technologies can result, as when we decide that it is forbidden [moral domain] to push someone [motor action domain] intentionally [folk psychology domain] in front of a train [object domain] to save the lives [moral domain] of five [number domain] others.

Third on my list of defining properties is the use of mental symbols. We can spontaneously convert any sensory experience—real or imagined— into a symbol that we can keep to ourselves or express to others through language, art, music or computer code.

Fourth, only humans engage in abstract thought. Unlike animal thoughts, which are largely anchored in sensory and perceptual experiences, many of ours have no clear connection to such events. We alone ponder the likes of unicorns and aliens, nouns and verbs, infinity and God. Although anthropologists disagree about exactly when the modern human mind took shape, it is clear from the archaeological record that a major transformation occurred during a relatively brief period of evolutionary history, starting approximately 800,000 years ago in the Paleolithic era and crescendoing around 45,000 to 50,000 years ago. 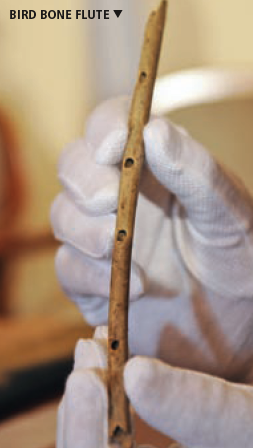 It is during this period of the Paleolithic, an evolutionary eyeblink, that we see for the first time multipart tools; animal bones punctured with holes to fashion musical instruments; burials with accoutrements suggesting beliefs about aesthetics and the afterlife; richly symbolic cave paintings that capture in exquisite detail events of the past and the perceived future; and control over fire, a technology that combines our folk physics and psychology and allowed our ancestors to prevail over novel environments by creating warmth and cooking foods to make them edible.

Posted by Deric Bownds at 5:35 AM
Email ThisBlogThis!Share to TwitterShare to FacebookShare to Pinterest
Blog Categories: human evolution