Left Brain and Right Brain in the regulation of our subjective feelings.

There is increasing evidence that an the insula areas of our left and right cerebral cortices process higher order re-representations of homeostatic (body regulatory) senses which are sent to prefrontal cortical areas and are the site of our subjective feelings about our bodies. (i.e., sensory information about our bodies from sympathetic and parasympathetic systems feeds to the insula and then on to the prefrontal cortex).

I'm including here quotes from a recent proposal by Craig in Trends in Cognitives Sciences (vol 9,pg. 566,2005) that tries to link many disparate threads to cast an integrated model of how basic regulatory levels of energy expenditure or storage regulated by the sympathetic and parasympathetic nervous systems though out our bodies connect to our higher levels of frontal lobe cognition. His proposal "highlights emerging evidence in support of a direct neuroanatomical relationship in the human forebrain between emotion and homeostasis that mirrors the asymmetric opponent management of energy acquisition and utilization by the autonomic nervous system."

"Recent neurobiological studies using anatomical, neurological, and functional imaging methods indicate that subjectively experienced feelings and emotions might be based on higher-order re-representations of homeostatic afferent (sensory) activity in the human forebrain, and it is particularly noteworthy that such evidence indicates a strong pattern of lateralization. Further, there is a comparable pattern of lateralization evident for the cortical control of cardiac activity, and this can be directly related to left/right asymmetry in the opposing parasympathetic and sympathetic components of the peripheral autonomic nervous system. The confluence of these strikingly parallel asymmetries suggests a homeostatic neuroanatomical model of emotional asymmetry, in which the left forebrain is associated predominantly with parasympathetic activity, and thus with nourishment, safety, positive affect, approach (appetitive) behavior, and group-oriented (affiliative) emotions, while the right forebrain is associated predominantly with sympathetic activity, and thus with arousal, danger, negative affect, withdrawal (aversive) behavior, and individual-oriented (survival) emotions. In the model I am proposing, management of physical and mental (meaning neural) energy is the salient organizational motif, such that energy enrichment is associated with the left forebrain and energy expenditure is associated with the right forebrain, consistent with the respective roles of the parasympathetic and sympathetic efferent systems. The autonomic principle of coordinated opponent interactions between the two hemispheres could provide a fundamental management process." 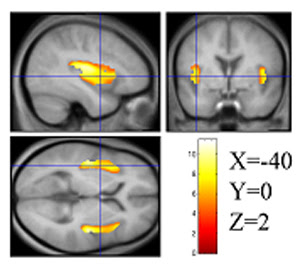 Figure: Imaging activity in the insula. Credit Univ. of Cambridge Center for Speech and Language.
Posted by Deric Bownds at 9:39 AM
Email ThisBlogThis!Share to TwitterShare to FacebookShare to Pinterest
Blog Categories: embodied cognition, emotion, self