Can we get human nature right?

Iris Berent does an interesting Perspective artice in PNAS that considers the strong intuitions that laypeople hold about human nature. People's attitudes bifurcate for "hot emotions" and "cold ideas." Emotions, people believe, are innate, whereas ideas must be learned. She suggests that the dissonance between intuitive dualism and essentialism explains why emotions and ideas elicit such conflicting reactions. Here is her summary graphic, followed by the article's abstract: 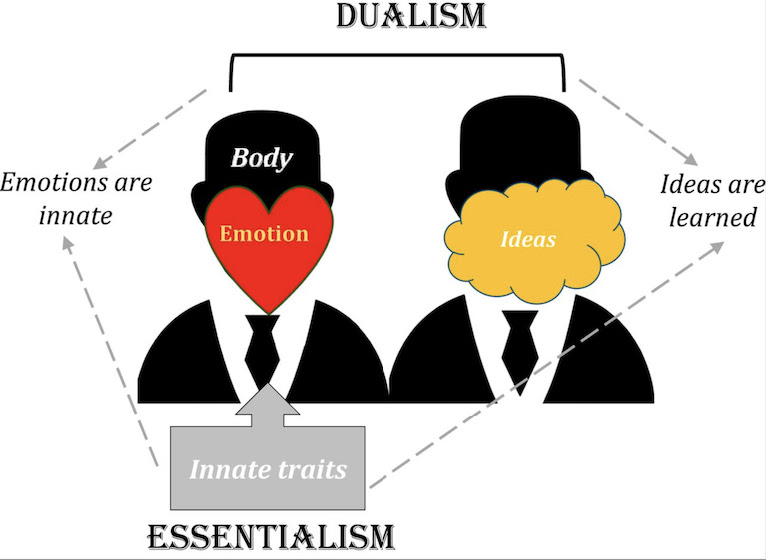 Few questions in science are as controversial as human nature. At stake is whether our basic concepts and emotions are all learned from experience, or whether some are innate. Here, I demonstrate that reasoning about innateness is biased by the basic workings of the human mind. Psychological science suggests that newborns possess core concepts of “object” and “number.” Laypeople, however, believe that newborns are devoid of such notions but that they can recognize emotions. Moreover, people presume that concepts are learned, whereas emotions (along with sensations and actions) are innate. I trace these beliefs to two tacit psychological principles: intuitive dualism and essentialism. Essentialism guides tacit reasoning about biological inheritance and suggests that innate traits reside in the body; per intuitive dualism, however, the mind seems ethereal, distinct from the body. It thus follows that, in our intuitive psychology, concepts (which people falsely consider as disembodied) must be learned, whereas emotions, sensations, and emotions (which are considered embodied) are likely innate; these predictions are in line with the experimental results. These conclusions do not speak to the question of whether concepts and emotions are innate, but they suggest caution in its scientific evaluation.

Posted by Deric Bownds at 12:00 AM
Email ThisBlogThis!Share to TwitterShare to FacebookShare to Pinterest
Blog Categories: consciousness, emotions, evolutionary psychology