I pass on a few edited clips from Filley's perspective piece in Science and the Editor's introduction describing work of Zhao et al.

...our cerebral cortex is only a few millimeters thick (the relative neglect of the rest of the brain below the cortex has prompted the term “corticocentric myopia”). Other regions relevant to behavior include the deep gray matter of the basal ganglia and thalamus, the brainstem and cerebellum, and the white matter that interconnects all of these structures. The white matter is composed of axonal tracts connecting different brain regions, and plays key roles in both normal brain function and a variety of neurological disorders. Zhao et al. have combined detailed magnetic resonance imaging–based assessment of brain structures with genetic data on nearly 44,000 individuals... On the basis of this comprehensive analysis, the authors have identified structural and genetic abnormalities associated with neurological and psychiatric disorders, as well as some nondisease traits, and have created a valuable resource providing some insights into the underlying neurobiology.

Here is the Zhao et al. abstract, followed by a graphic from Filley's review.

Brain regions communicate with each other through tracts of myelinated axons, commonly referred to as white matter. We identified common genetic variants influencing white matter microstructure using diffusion magnetic resonance imaging of 43,802 individuals. Genome-wide association analysis identified 109 associated loci, 30 of which were detected by tract-specific functional principal components analysis. A number of loci colocalized with brain diseases, such as glioma and stroke. Genetic correlations were observed between white matter microstructure and 57 complex traits and diseases. Common variants associated with white matter microstructure altered the function of regulatory elements in glial cells, particularly oligodendrocytes. This large-scale tract-specific study advances the understanding of the genetic architecture of white matter and its genetic links to a wide spectrum of clinical outcomes. 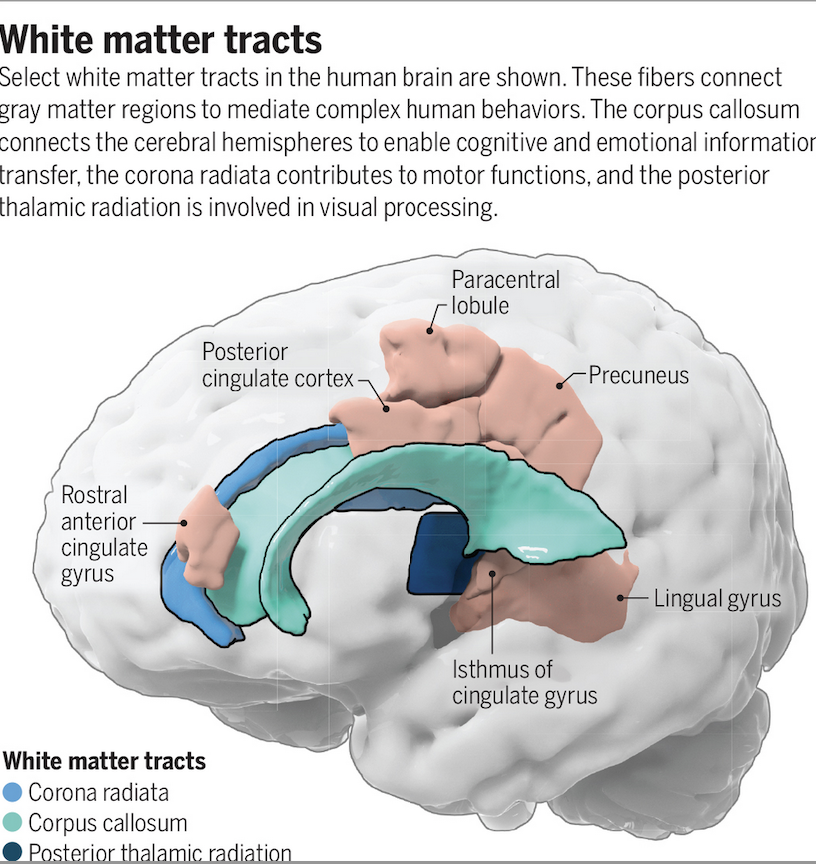 Posted by Deric Bownds at 12:00 AM
Email ThisBlogThis!Share to TwitterShare to FacebookShare to Pinterest
Blog Categories: consciousness