Snyder-Mackler et al. have reviewed the relationships between social environment and many aspects of health and well-being across nonhuman mammals and investigated the similarities between these and patterns in humans. They found many of the same threats and responses across social mammals.


The relationship between the social environment and mortality risk has been known in humans for some time, but studies in other social mammals have only recently been able to test for the same general phenomenon. These studies reveal that measures of social integration, social support, and, to a lesser extent, social status independently predict life span in at least four different mammalian orders. Despite key differences in the factors that structure the social environment in humans and other animals, the effect sizes that relate social status and social integration to natural life span in other mammals align with those estimated for social environmental effects in humans. Also like humans, multiple distinct measures of social integration have predictive value, and in the taxa examined thus far, social adversity in early life is particularly tightly linked to later-life survival.

Animal models have also been key to advancing our understanding of the causal links between social processes and health. Studies in laboratory animals indicate that socially induced stress has direct effects on immune function, disease susceptibility, and life span. Animal models have revealed pervasive changes in the response to social adversity that are detectable at the molecular level. Recent work in mice has also shown that socially induced stress shortens natural life spans owing to multiple causes, including atherosclerosis. This result echoes those in humans, in which social adversity predicts increased mortality risk from almost all major causes of death.

A comparative perspective on the social determinants of health (click to enlarge). 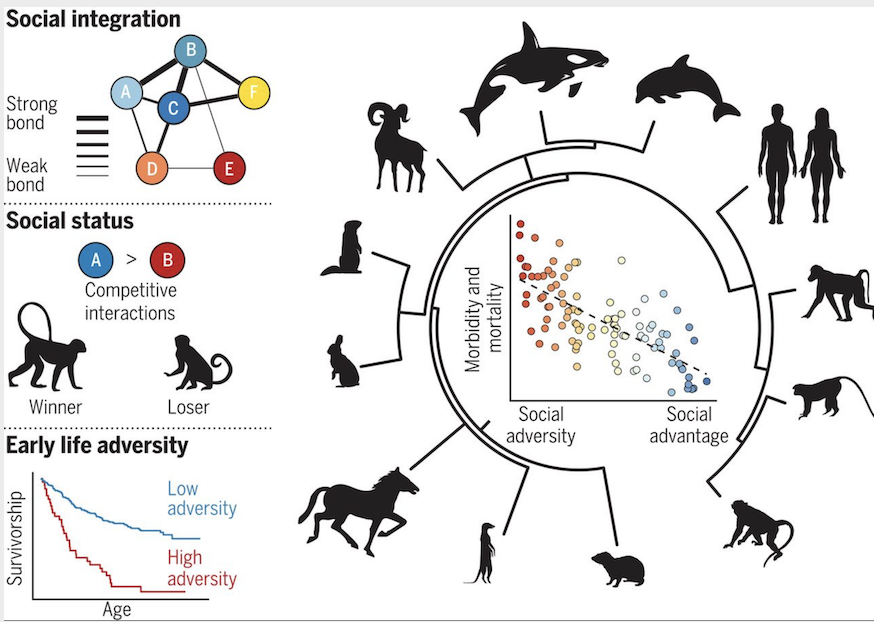 Posted by Deric Bownds at 12:00 AM
Email ThisBlogThis!Share to TwitterShare to FacebookShare to Pinterest
Blog Categories: fear/anxiety/stress