I like to be generous, loving, kind and nice, but a recent PsyPost article on the slowing of cellular aging by loving-kindness meditation triggered my bullshit detector. I first pass on the summary and abstract of the work referenced in the article by Le Nguyen et al., and then get a bit into the details available only to those who have journal access (motivated readers can request a PDF of the article from me). It is a noble and complicated effort, with proper double blind controls, but with statistics compromised by a small sample size and measured changes in DNA telomere length (a proxy for aging) over a short period of time much larger than would be expected from longer terms studies. While I would like to believe the conclusions drawn by the authors, I have to remain wary of accepting them.

•Telomere length decreased in the mindfulness group and the control group.


Combinations of multiple meditation practices have been shown to reduce the attrition of telomeres, the protective caps of chromosomes (Carlson et al., Cancer, 121 (2015), pp. 476-484). Here, we probed the distinct effects on telomere length (TL) of mindfulness meditation (MM) and loving-kindness meditation (LKM). Midlife adults (N = 142) were randomized to be in a waitlist control condition or to learn either MM or LKM in a 6-week workshop. Telomere length was assessed 2 weeks before the start of the workshops and 3 weeks after their termination. After controlling for appropriate demographic covariates and baseline TL, we found TL decreased significantly in the MM group and the control group, but not in the LKM group. There was also significantly less TL attrition in the LKM group than the control group. The MM group showed changes in TL that were intermediate between the LKM and control groups yet not significantly different from either. Self-reported emotions and practice intensity (duration and frequency) did not mediate these observed group differences. This study is the first to disentangle the effects of LKM and MM on TL and suggests that LKM may buffer telomere attrition. 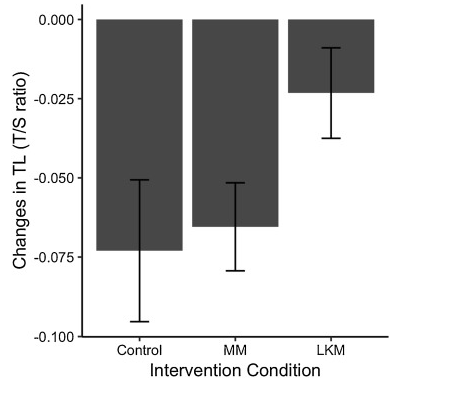 Fig. 1. Descriptive Mean and Standard Errors of Changes in TL per Experimental Conditions. (TL is expressed as the ratio (T/S) of telomeric (T) to single copy (S) gene product for a particular blood sample)

Apart from picking apart their statistics and the "controls for demographic covariates," the discussion paragraph that troubles me most is:


The difference in telomere length between the Control and LKM groups was .048 T/S ratio after demographic covariates were considered. Based on comparison of T/S ratios and telomere length measured by Southern blot in a series of quality control samples from the same lab, we estimated this difference of .048 T/S ratio to be 115 basepairs. This TL decrease over the 12-week period appears to be large compared to studies of TL change with much longer time periods (Müezzinler et al., Obes. Rev., 15 (2014), pp. 192-201). It is possible that this reflects short term dynamic change, or potential systematic differences in the collection and/or assay of baseline and follow-up samples. The fact that DNA extraction and assay were done as one batch (all samples from Time 1 and Time 2) argues against the latter concern, although we cannot completely rule out other potential unaccounted for systematic differences. Although it is unknown whether this effect remains longer than 3 weeks post-intervention, the current study demonstrated proof of concept for the malleability of TL changes, and that certain forms of meditation, in this case loving-kindness meditation, may buffer against telomere erosion.

After several paragraphs of other reservations and cautions on the data, the authors state:


...one should interpret the differences in TL changes here with caution, treating them as evidence for “apparent” rather than true alterations in TL.