How experiencing nature influences our brains.

Bratman et al., in their PNAS article with the title "Nature experience reduces rumination and subgenual prefrontal cortex activation," suggest an explanation for why nature experience, in contrast to urban experience, enhances our sense of well-being:


Urbanization has many benefits, but it also is associated with increased levels of mental illness, including depression. (More than 50% of people now live in urban areas. By 2050 this proportion will be 70%.) It has been suggested that decreased nature experience may help to explain the link between urbanization and mental illness. This suggestion is supported by a growing body of correlational and experimental evidence, which raises a further question: what mechanism(s) link decreased nature experience to the development of mental illness? One such mechanism might be the impact of nature exposure on rumination, a maladaptive pattern of self-referential thought that is associated with heightened risk for depression and other mental illnesses. We show in healthy participants that a brief nature experience, a 90-min walk in a natural setting, decreases both self-reported rumination and neural activity in the subgenual prefrontal cortex (sgPFC), whereas a 90-min walk in an urban setting has no such effects on self-reported rumination or neural activity. In other studies, the sgPFC has been associated with a self-focused behavioral withdrawal linked to rumination in both depressed and healthy individuals. This study reveals a pathway by which nature experience may improve mental well-being and suggests that accessible natural areas within urban contexts may be a critical resource for mental health in our rapidly urbanizing world.

From the body of the paper:


On arrival at our laboratory, each participant completed a self-report measure of rumination (RRQ) and underwent our scanning procedure. We then randomly assigned each participant to a 90-min walk in either a natural environment (19 participants) or urban environment (19 participants). The nature walk took place near Stanford University, in a greenspace comprising grassland with scattered oak trees and shrubs. The urban walk took place on the busiest thoroughfare in nearby Palo Alto (El Camino Real), a street with three to four lanes in each direction and a steady stream of traffic (Fig. S1). After the walk, each participant returned to the laboratory and provided a second, follow-up self-report of levels of rumination (RRQ) before undergoing a second resting-state ASL scan. Transportation to and from the walk was via a car ride of 15-min duration (for both walks). Participants were given a smartphone and told to take 10 photographs during their walk (Fig. S2). These photographs were used to verify that participants went on the walk. We also tracked the phone itself during the walk, as further verification that the correct route was taken by each participant. 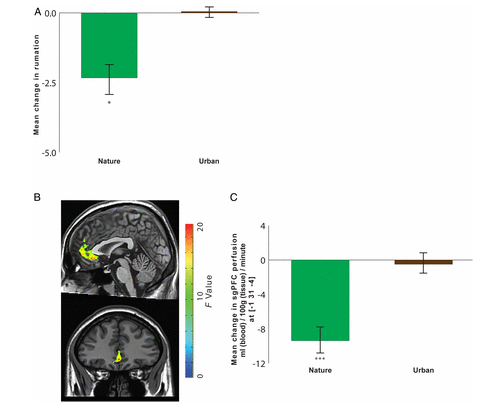 Posted by Deric Bownds at 3:00 AM
Email ThisBlogThis!Share to TwitterShare to FacebookShare to Pinterest
Blog Categories: attention/perception, self