Our subjective sensory experiences are regulated by defined brain areas subh visual cortex, auditory cortex,somatosensory cortex, etc., but there doesn't appear to be a "pain cortex" that directly codes our subjective perception of pain. Mano and Seymour, in a review of Woo et al., note the emerging concept that pain might emerge from the coordinated activity of an integrated brain network. Woo et al. provide evidence that distinct brain networks support the subjective changes in pain that result from nociceptive input and self-directed cognitive modulation. Their abstract, followed by a summary graphic from Mano and Seymour:


Cognitive self-regulation can strongly modulate pain and emotion. However, it is unclear whether self-regulation primarily influences primary nociceptive and affective processes or evaluative ones. In this study, participants engaged in self-regulation to increase or decrease pain while experiencing multiple levels of painful heat during functional magnetic resonance imaging (fMRI) imaging. Both heat intensity and self-regulation strongly influenced reported pain, but they did so via two distinct brain pathways. The effects of stimulus intensity were mediated by the neurologic pain signature (NPS), an a priori distributed brain network shown to predict physical pain with over 90% sensitivity and specificity across four studies. Self-regulation did not influence NPS responses; instead, its effects were mediated through functional connections between the nucleus accumbens and ventromedial prefrontal cortex. This pathway was unresponsive to noxious input, and has been broadly implicated in valuation, emotional appraisal, and functional outcomes in pain and other types of affective processes. These findings provide evidence that pain reports are associated with two dissociable functional systems: nociceptive/affective aspects mediated by the NPS, and evaluative/functional aspects mediated by a fronto-striatal system. 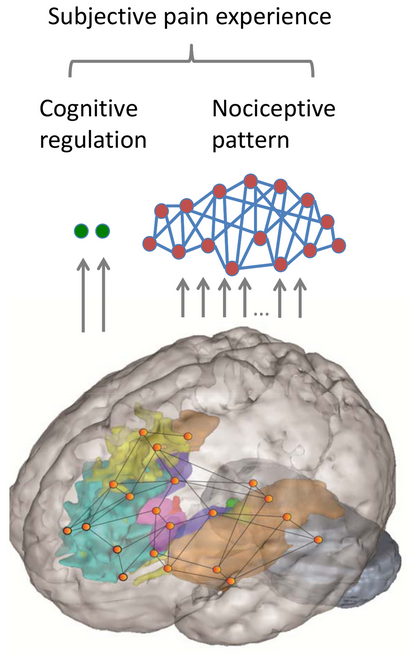 Posted by Deric Bownds at 3:00 AM
Email ThisBlogThis!Share to TwitterShare to FacebookShare to Pinterest
Blog Categories: attention/perception