A neural prosthesis can restore sensory-motor function after brain damage.

Guggenmos et al. use a brain–machine–brain interfaces (BMBIs) to reconnect two active brain regions whose connections had severed by damage to the brain area between them:


Closed-loop systems, or brain–machine–brain interfaces (BMBIs), have not been widely developed for brain repair. In this study, we targeted spared motor and somatosensory regions of the rat brain after traumatic brain injury for establishment of a functional bridge using a battery-powered microdevice. The results show that by using discriminated action potentials as a trigger for stimulating a distant cortical location, rapid recovery of fine motor skills is facilitated. This study provides strong evidence that BMBIs can be used to bridge damaged neural pathways functionally and promote recovery after brain injury. Although this study is restricted to a rodent model of TBI, it is likely that the approach will also be applicable to other types of acquired brain injuries. 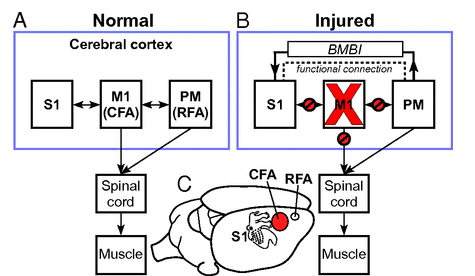 Figure: Model of neuroprosthetic treatment approach after brain injury. (A) Normal connectivity of M1 (motor cortex), S1 (somatosensory cortex), and PM (premotor cortex). Both M1 (CFA in rat) and PM (RFA in rat) send substantial outputs to the spinal cord via the corticospinal tract. Also, extensive reciprocal connections exist between M1 and PM, as well as between M1 and S1. (B) Effects of focal M1 injury on brain connectivity and the hypothetical effect of a BMBI to restore somatosensory-motor communication. An injury to M1, as might occur in stroke or brain trauma, results in a focal area of necrosis, as well as loss of M1 outputs to the spinal cord. Corticocortical communication between M1 and S1 (and between M1 and PM) is also disrupted, further contributing to functional impairment. Because the uninjured PM also contains corticospinal neurons, it might have the ability to serve in a vicarious role. The dotted line indicates enhanced functional connection between PM and S1 that we propose is established after treatment with a BMBI. (C) Location of target areas in rat cerebral cortex. A topographic map of the somatosensory representation in S1 is superimposed on the cortex.

Posted by Deric Bownds at 6:06 AM
Email ThisBlogThis!Share to TwitterShare to FacebookShare to Pinterest
Blog Categories: acting/choosing, brain plasticity