Be young in perception and behavior! Put yourself in a virtual child’s body!

Banakou et al. show that if we use some simple tricks to project ourselves into a 4-year old's body, we overestimate object sizes and more readily associate ourselves with child-like attributes:


An illusory sensation of ownership over a surrogate limb or whole body can be induced through specific forms of multisensory stimulation, such as synchronous visuotactile tapping on the hidden real and visible rubber hand in the rubber hand illusion. Such methods have been used to induce ownership over a manikin and a virtual body that substitute the real body, as seen from first-person perspective, through a head-mounted display. However, the perceptual and behavioral consequences of such transformed body ownership have hardly been explored. In the first experiment, immersive virtual reality was used to embody 30 adults as a 4-y-old child (condition C), and as an adult body scaled to the same height as the child (condition A), experienced from the first-person perspective, and with virtual and real body movements synchronized. The result was a strong body-ownership illusion equally for C and A. Moreover there was an overestimation of the sizes of objects compared with a nonembodied baseline, which was significantly greater for C compared with A. An implicit association test showed that C resulted in significantly faster reaction times for the classification of self with child-like compared with adult-like attributes. A second experiment with an additional 16 participants extinguished the ownership illusion by using visuomotor asynchrony, with all else equal. The size-estimation and implicit association test differences between C and A were also extinguished. We conclude that there are perceptual and probably behavioral correlates of body-ownership illusions that occur as a function of the type of body in which embodiment occurs. 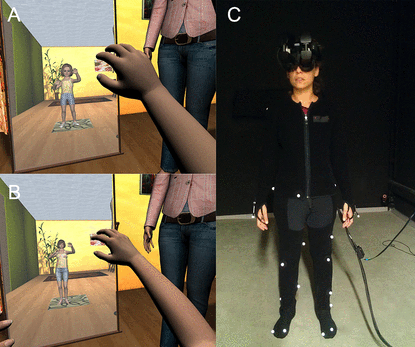 Posted by Deric Bownds at 5:52 AM
Email ThisBlogThis!Share to TwitterShare to FacebookShare to Pinterest
Blog Categories: attention/perception, brain plasticity, self