How do you feel — now? The anterior insula and human awareness

In a perspectives article in Nature Neuroscience Bud Craig proposes that the anterior insula plays a fundamental role in human awareness (if you simply enter 'anterior insula' in google images you can see depictions of the structures for yourself, or see the figure below). Here is his abstract, followed by a description of the structure and then his model for the involvement of the insula in awareness:

The anterior insular cortex (AIC) is implicated in a wide range of conditions and behaviours, from bowel distension and orgasm, to cigarette craving and maternal love, to decision making and sudden insight. Its function in the re-representation of interoception offers one possible basis for its involvement in all subjective feelings. New findings suggest a fundamental role for the AIC (and the von Economo neurons it contains) in awareness, and thus it needs to be considered as a potential neural correlate of consciousness. 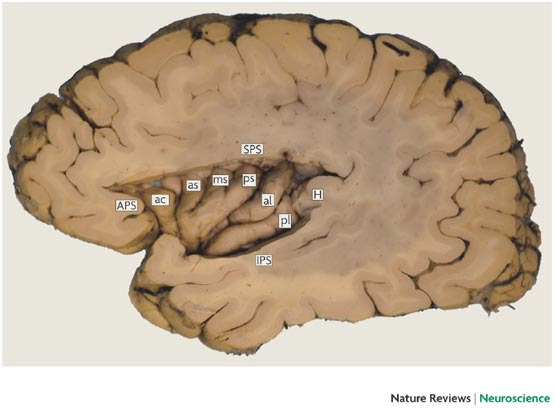 A photograph of the left insular cortex of a human patient. The human insular cortex is a distinct but hidden lobe of the brain. It is disproportionately (approx30%) enlarged in the human relative to the macaque monkey. It has 5–7 oblique gyri, but its morphology is quite variable, even between the two sides. Primary interoceptive representations are located in the dorsal posterior insula and re-represented in a polymodal integrative zone in the mid-insula and again in the anterior insular cortex (AIC). The primary interoceptive, gustatory and vagal representations extend to the anterior limit of the insula in macaques but only to the middle of the insula in humans, which suggests that the AIC of humans has no equivalent in the monkey. The most anterior and ventral (inferior) portion of the human insula that adjoins the frontal operculum is probably the most recently evolved, because this part (as well as the anterior cingulate cortex) contains von Economo neurons. as, anterior short insular gyrus; al, anterior long insular gyrus; ac, accessory gyrus; APS, anterior peri-insular sulcus; H, Heschl's gyrus; IPS, inferior peri-insular sulcus; ms, middle short insular gyrus; ps, posterior short insular gyrus; pl, posterior long insular gyrus; SPS, superior peri-insular sulcus. Photograph is courtesy of Professor Thomas P. Naidich, Mount Sinai Medical Center, New York. 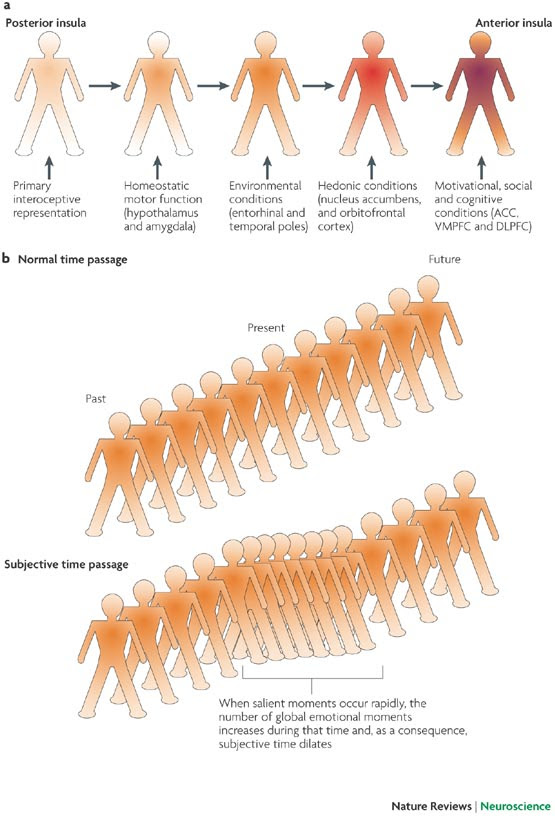 Cartoons illustrating features of the proposed structural model of awareness. a | The posited integration of salient activity, progressing from the posterior insula (left) to the anterior insula (right). The primary interoceptive representations of feelings from the body provide a somatotopic foundation that is anchored by the associated homeostatic effects on cardiorespiratory function, as indicated by the focus of the colours in the chest. The integration successively includes homeostatic, environmental, hedonic, motivational, social and cognitive activity to produce a 'global emotional moment', which represents the sentient self at one moment of time. b | The top cartoon shows how a series of global emotional moments can produce a cinemascopic 'image' of the sentient self across time. The lower cartoon shows how the proposed model can produce a subjective dilation of time during a period of high emotional salience, when global emotional moments are rapidly 'filled up'. ACC, anterior cingulate cortex; DLPFC, dorsolateral prefrontal cortex; VMPFC, ventromedial prefrontal cortex.

Posted by Deric Bownds at 5:15 AM
Email ThisBlogThis!Share to TwitterShare to FacebookShare to Pinterest
Blog Categories: attention/perception, embodied cognition, self