The narcissism epidemic is dead?

An interesting piece from Wetzel et al., who find no evidence for a commonly reported narcissism epidemic over the past 10-20 years, based on the perception that today’s popular culture encourages individuals to engage in self-inflation:


Are recent cohorts of college students more narcissistic than their predecessors? To address debates about the so-called “narcissism epidemic,” we used data from three cohorts of students (1990s: N = 1,166; 2000s: N = 33,647; 2010s: N = 25,412) to test whether narcissism levels (overall and specific facets) have increased across generations. We also tested whether our measure, the Narcissistic Personality Inventory (NPI), showed measurement equivalence across the three cohorts, a critical analysis that had been overlooked in prior research. We found that several NPI items were not equivalent across cohorts. Models accounting for nonequivalence of these items indicated a small decline in overall narcissism levels from the 1990s to the 2010s (d = −0.27). At the facet level, leadership (d = −0.20), vanity (d = −0.16), and entitlement (d = −0.28) all showed decreases. Our results contradict the claim that recent cohorts of college students are more narcissistic than earlier generations of college students. 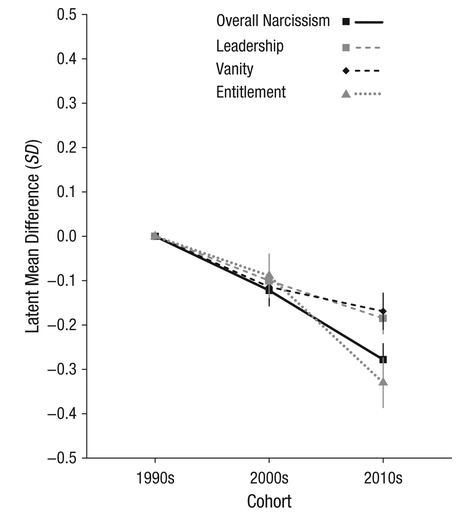 Figure: Difference between latent means estimated in partial-invariance models as a function of cohort and trait. The means of the 1990s cohort were constrained to 0 for model identification. Mean differences between the 1990s and the 2000s cohorts and between the 1990s and 2010s cohorts can be interpreted as standard deviations. Error bars show ±1 SE of the estimated mean difference.
Posted by Deric Bownds at 3:00 AM
Email ThisBlogThis!Share to TwitterShare to FacebookShare to Pinterest
Blog Categories: culture/politics, social cognition